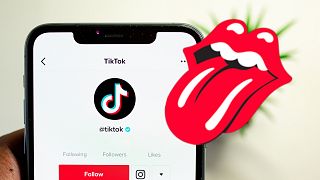 Finally, the day we’ve all been waiting for... The Rolling Stones have joined TikTok.

The band, which formed over 60 years ago and includes fellow 79-year-olds singer Mick Jagger and guitarist Keith Richards have officially become a part of the youthful social media platform.

While octogenarian rockers and a platform mostly used by Gen-Z influencers might not be the most obvious combination, the partnership will open up TikTok creators to using the Stones’ extensive back catalogue more easily in their content.

TikTok has an incredible ability at reviving classic tunes and deep cuts, as seen last year with the re-emergence of Kate Bush’s 1985 track ‘Running Up That Hill’ after it featured in the latest season of ‘**Stranger Things**’.

When Nathan Apodaca posted a TikTok of him skateboarding down a highway with a bottle of cranberry juice mouthing the lyrics to Fleetwood Mac’s ‘Dreams’, he didn’t think he’d be responsible for a whole generation learning about Stevie Nicks. But that’s the power of TikTok.

Now, Jagger and co want a piece of the action. They’ve even started their own personal accounts alongside the official band account. Mick Jagger is on @jagger and Keith Richards has had his @officialkeef since last year.

The pair have put together a TikTok playlist of 44 essential Rolling Stones tracks for people to sink their teeth into.

So far, the official band channel has just four videos, all imploring people to get involved by remixing or covering their work. But the Stones’ renown has long put their fingerprint on the platform. Hashtags related to them already have over 500 million views.

If you’re a fan of classics like ‘Paint it Black’, ‘Sympathy for the Devil’ or ‘Angie’, the band may be on the cusp of a whole new generation discovering them.

In a new year’s message, Keith Richards teased that the band may also be releasing some new music and going on tour again this year.