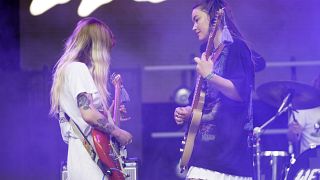 Wet Leg played to a packed audience last night at the O2 Kentish Town Forum in London. It was a celebratory gig for the indie band that’s taken the UK by storm in 2022.

Two years ago, no one had heard of Wet Leg. A handful of recordings were on Spotify before the Isle of Wight band deleted everything to start afresh with their debut single ‘Chaise Longue’.

Released in June 2021, 'Chaise Longue' quickly made its way across radio stations, social media platforms and Spotify playlists. By the time their self-titled first album dropped, Wet Leg had moved from obscurity to one of the most hyped acts in the country.

Since the first album, Wet Leg have toured with Harry Styles, been nominated for the Mercury Prize and collected a handful of Grammy nominations.

For last night’s gig, they also tried a new idea out: Wet Leg live streamed the entire concert on TikTok.

Available to reach their over 500,000 followers, it is part of a savvy social media strategy that has brought the band into the limelight.

Indie music is truly back in fashion in the UK thanks to acts like Wet Leg, Sam Fender, Nova Twins, Cassyette and Jordan Adetunji. Part of this success is down to bands reaching out to their fanbases via TikTok.

Wet Leg, made up of Rhian Teasdale and Hester Chambers, regularly post concert snippets and behind-the-scenes content to their channel.

“I think that TikTok has helped them get their music out to a wider audience,” says Sheema Siddiqi, Artist Community Manager at TikTok UK.

The band joined TikTok after they released 'Chaise Longue' and immediately started using it to communicate their music, but also their sense of humour.

“One of my favourite things that they do is they'll respond to comments. It essentially promotes their music at the same time but all their comments are a little bit tongue-in-cheek, and do a really great job of showing their personality,” Siddiqi says.

Indie music has never been bigger after it fell out of popularity in the 2010s. Part of that is through new artists making waves through social media.

Sam Fender’s line: “I was far too scared to hit him / But I would hit him in a heartbeat now / That's the thing with anger / It begs to stick around” from his anthem ‘Seventeen Going Under’ became the backing track to thousands of TikTok videos detailing personal tales of abuse.

The lyrics are resonating with people and a new era of stars willing to be closer to the fans.

But baring all on TikTok isn’t right for all artists.

Earlier this year, Rebecca Lucy Taylor, better known as Self Esteem, wrote an opinion piece for the Guardian on why she worries that artists, and particularly female artists, are being increasingly forced to have online presences.

“But what do you do if sharing parts of yourself isn’t for you? In my 20s I would have blindly believed the authority of labels and management and done anything to grab what might be a ticket to success, with no thought for the consequences it might have later on,” she writes.

“It feels as though the artists decrying TikTok (and the many fans tweeting their dismay about it too) are seen by the industry as being too precious or old-fashioned. But ultimately, the artists that do have a good bash at TikTok will prevail in the ever hungry endless machine, at least for now. It moves without you. So you have no choice,” Taylor notes.

It’s undeniable that having a social media presence is a valuable tool in attracting new fans. But any artist being forced onto a platform they don’t feel comfortable on is only going to make content that reeks of inauthenticity.

It’s better artists only do what they are genuinely comfortable to do, says TikTok’s Siddiqi.

“I think we can always tell when someone like Oasis was doing an MTV interview and they could not be bothered. I don't think that it’s different now that content exists on TikTok.”

“We say you shouldn't be making anything that you don’t feel comfortable putting out there. If if you don't feel comfortable doing straight to camera things, then don't do it. You don't want to do lip-syncs or dances, which is what everyone thinks TikTok is, don't do that,” Siddiqi says.

Instead, she says that often the best content comes from bands and musicians who just let fans into a candid part of their daily life. Be it the realities of touring or recording a song.