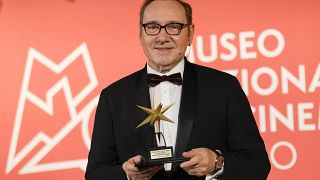 What a difference a country makes…

After having pleaded innocent to seven further sex offenses in Britain last week (Friday 13 January), disgraced Oscar-winning actor Kevin Spacey has made his first speaking appearance since #MeToo -era allegations derailed his career in Turin. There, he received a Lifetime Achievement Award.

The special honorary event organised by Italy’s National Cinema Museum saw the actor discuss key roles during a master class and then introduce the 1999 film American Beauty, for which he won his second acting Oscar. All to a sold-out crowd.

“I am truly blessed and grateful and humbled. And my heart is very full tonight toward the National Museum of Cinema for having had “le palle” (the balls) to invite me tonight,’’ Spacey said to applause as he accepted the museum’s Mole Antonelliana lifetime achievement award.

“By presenting this award, they are making a strong defence of artistic achievement and for that, they should be applauded,” he said.

The actor, who has been keeping a low profile since 2017, shared anecdotes about his 40-year-career, including behind-the-scenes stories of his time on film sets for The Usual Suspects, Se7en, L.A. Confidential and House Of Cards.

Spacey was asked about his time as artistic director of the Old Vic Theatre Company in London from 2003 to 2015, but there was no mention of the sexual assault accusations against the actor, alleged to have taken place during this period and which he has denied.

The actor declined to talk to the international trade press during his time in Turin and will travel to Rome in the coming days for the world premiere of Franco Nero’s detective tale The Man Who Drew God, which marks his first feature credit since 2017.

Spacey is scheduled to go on trial in London in June on a dozen charges alleging he sexually assaulted four men between 2001 and 2013, including when he was the artistic director at the city’s Old Vic theater.

His trial is due to start on 6 June and last for up to four weeks.

Kevin Spacey not guilty in US sexual misconduct trial