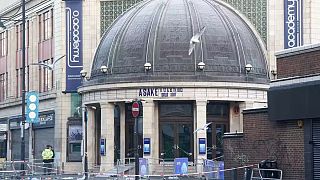 New revelations on the tragedy that occured at the O2 Academy Brixton, where two people died in a crowd crush at the venue   -   Copyright  PA Wire
By Jonny Walfisz  •  Updated: 17/01/2023

Security guards were regularly taking bribes at the London venue where two people died in a crowd crush last month.

The Brixton O2 Academy, one of the city’s most well-known music venues, was the scene of tragedy in December. Hundreds of people over the venue’s capacity arrived for a gig by Afro-pop star Asake.

Two people died in the ensuing crush. Mother of two Rebecca Ikumelo, 33, and security guard Gaby Hutchinson, 23, were both taken to hospital on 15 December where they later succumbed to their injuries.

The London Metropolitan Police have begun an investigation into what happened. After advice by the police, the local council has suspended Brixton Academy’s licence for three months.

Brixton Academy’s owners Academy Music Group (AMG) had already decided to close for the three-month period regardless of the official suspension.

“O2 Academy Brixton recognises the gravity of the events which occurred on the night of 15 December 2022 and expresses its sincere condolences to the families of those who died during the tragic incident and its genuine concerns for anyone affected by it,” AMG said.

The explanation behind the crush is believed to be people arriving without tickets and expecting to be let in.

Speaking to the BBC, a security guard at the venue has said that members of his team would each allow “a couple of hundred” extra people into venues in exchange for money. Their employer, AP Security, has declined to comment.

“Our company knew what was going on and they knew the people who were doing it,” he told the BBC, “and they did nothing about it.”

According to the anonymous guard who was working the night of the crush, there had been just 110 members of security on shift, when there should have been 190.

“It was like being in a car crash that's been really awful - being crashed on and stamped on,” he describes.

The security guard works for a different security firm to the one Gaby Hutchinson worked for and has not suggested Hutchinson was involved in taking bribes or letting people in without tickets.

However, he has accused his firm of allowing the practice.

“When you let a few people in, they would text their friends, and they'll text their friends. And the bouncers started being greedy, and it got out of hand. And people wanted to come in anyway, without a ticket.” he said.

The bribe issue was known to AP Security, the guard alleges, as he claims to have been in two meetings where complaints were made about two particular individuals.

An anonymous gig goer also confirmed to the BBC that security personnel were involved in selling fake tickets. Trying to buy tickets to a concert on the door, he was told to take cash out at a close by ATM where he was given seemingly fake tickets and rushed through the front entrance.

“It felt really organised and it felt that we weren't the only people that got in that way,” the gig goer said.