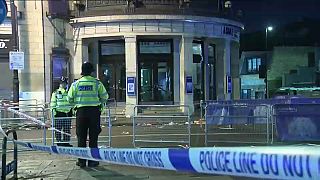 In London, four people were in critical condition in hospital on Friday after being crushed in a crowd at a concert venue.

Police in the city said they were called to the 02 Brixton Academy on Thursday night, where they said hundreds of people without tickets forced their way into the concert venue during a performance by Nigerian Afrobeats star Asake.

Officers said eight people were taken to hospital and two others were treated at the scene.

The promoter of the event halted the performance after learning what was happening, explaining to the audience that a crowd of people had breached the doors.

As well as police officers ambulances and firefighters attended the scene.

A senior police commander said an investigation has been launched, and that "it will be as thorough and as forensic as necessary to establish exactly what happened."

The Brixton Academy in south London is one of the city's most famous music venues with a capacity of just under 5,000.