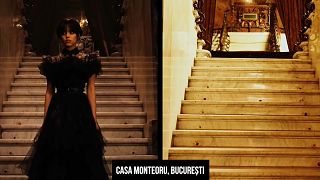 Netflix's hit series, Wednesday, wasone of the streamer's biggest hits of 2022, drawing in millions of viewers since its release last November. To date, it's exceeded 1.2 billion.

Fans will be delighted to hear that the show has been renewed for a second season and that it is possible to visit the ghost town of Jericho and the Nevermore Academy - sets filmed in the Buftea studios in Romania, just a stone's throw away from Bucharest.

Flavian Dobre worked on the production and now organises guided tours of the studios.

"It was a hefty production, that took over eight months to film, and involved beautiful people: people who have revived, who gave precedence to Romanian cinema and made everything happen here at the Buftea Studios, a place that has a very strong emotional, cinematic and cultural charge."

Many Romanian natural settings were used for the series, and for Romanian tourism, it is a boon to showcase these locations. One tour operator recently estimated a 55% increase in hotel occupancy around Bucharest, due to the influx of Romanian, European and non-European tourists after the episodes began airing on Netflix.

Many technicians, extras and actors took part in the production, notably for the role of "Thing", a bodiless hand, behind which hides a Romanian magician: Victor Dorobantu became an actor for the duration of the film.

"It's my acting debut," says Dorobantu. "I don't know what to say. I was shocked, and I still am, because now, after the show was released, there was an explosion in the media and television, all over the world, about how this character was created."

"From what I understood, statistically speaking, it was the biggest curiosity about this series," he adds.

Fans of the show will have to wait a little longer for season 2 to drop, but at least the success of the first season is giving travel enthusiasts another reason to visit Romania and discover its charms. Gothic or otherwise.