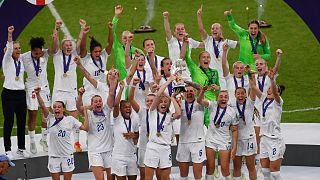 England's Lionesses won the UEFA European Championship in 2022   -   Copyright  AP Photo
The opinions expressed in this article are those of the author and do not represent in any way the editorial position of Euronews.
By Tim Gallagher  •  Updated: 26/12/2022

In light of recent football-related events, it’s difficult to think of the ‘beautiful game' as a bastion of progressive politics and representation, until you remember that, earlier this year, it was.

As a queer person with many triggering memories of PE lessons, football is something I usually strive to avoid. In fact, I’d go so far as to say it’s the epitome of everything I've strived to exclude from my adult life; namely aggression, masculine competition, and group activities.

But then I found out women’s football existed.

Seeing the England women’s team win the Euros was quite the revelation.

Having (shamefully) never watched women’s football before, it seemed that the vibe couldn’t be more different. The players displayed a level of open-hearted camaraderie, and the fans appeared so good humoured that it was hard to imagine the racist abuse or outbreaks of violence that everyone pretends are one-offs in the men’s game.

Best of all for me though was that the Lioness’s team, who managed to triumph where their male counterparts had lost earlier this year, is also stacked with queer players. Rachel Daly, Lauren Hemp, and Jill Scott are all out queer women accepted by fans and their teammates, a stark contrast to male football players forced to stay in the closet for fear of fan and industry reactions.

Seeing the women’s teams celebrations after they won the final against Germany, all wearing rainbow insignia brought a tear to my eye - not something I thought a football match would ever do.

After a summer and World Cup of controversy over arm bands, human rights and freedom of expression, it’s heartwarming to remember that you can have football and equality at the same time.