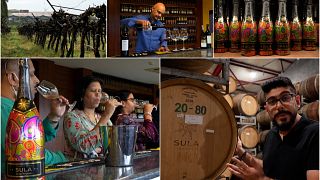 India's largest winemaker Sula Vineyards is now on the stock market and targeting the middle class.

The Stanford graduate is betting on the diversifying tastebuds of a booming urban middle class in a country that has long favoured strong liquor.

Named after Samant's mother Sulabha, Sula planted its first vines in 1996, later building a sprawling resort and helping to cultivate a new reputation for Nashik as India's wine capital.

"India is one of the world's biggest grape producers and Nashik is one of its key regions, but back then the vines were all table grapes for eating and raisins, rather than wine grapes," he adds.

"Where Sula is today, it was just grassland. There were leopards and snakes. There was no electricity, there was no telephone line, as if it was a century earlier," says Samant.

Samant was inspired by his visits to California's Napa Valley wine country.

When he from California, he initially tried growing roses and mangoes on family-owned land near Nashik, an ancient holy city about 160 kilometres from financial hub Mumbai.

"Why not try to make a decent, drinkable wine right here in India, proudly made in India?" he thought. "And that's what I decided to do."

Sula Vineyards dropped more than 5 per cent on its trading debut in a dull market on Thursday, valuing the winemaker at around €324 million, after a weaker-than-expected response to its initial public offering last week.

Wine makes up less than one percent of India's massive alcohol market, with spirits the overwhelming drink of choice in the nation of 1.4 billion people.

On average, Indians each drink only a few spoonfuls of wine a year, but producers hope the country will replicate the wine boom in China when its economy took off in the 1980s.

Still, experts warn their rosé ambitions are tempered by uncertainties including the impact of climate change on viniculture, and an Australian trade deal lowering import tariffs.