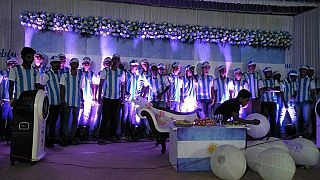 World Cup: No, Indian fans who marched in Doha are not fake

It’s Friday, and it’s the weekend. Everyone has a big smile on their face as they sing and dance. Little children sitting on their fathers’ shoulders wave their hands with glee. Thousands of Indians, especially from the southern state of Kerala, descended on the Corniche to take part in the parade supporting football teams.

Wearing their favourite side's shirts, they beat drums and blew horns. They raised slogans and carried flags of their beloved teams from the Flag Plaza to the Countdown Clock Qatar's the capital city.

Tito K. Sidharthan, who was on the Corniche with his family, sums up the feeling of everyone who participated in the march. “It was just awesome. There were thousands of supporters like me, and I feel so happy to be a part of the parade. I would never miss a chance to show my love and support for Brazil.”

Several journalists and commentators on social media have questioned if the Indians were “real fans”. They were even accused of being paid to wear the shirts of Brazil, Argentina, and England to promote the tournament. However, supporters who participated in the rally strongly denied all the allegations levelled against them.

“The claims are totally false and motivated. Since childhood, I’ve supported Argentina. Even if I was elsewhere, I would have joined the march to back Messi’s team,” says Brijesh K. Das, who has been living in Qatar since 2002.

“Qatar is like a second home to me. I even participated in the parade at Lusail Boulevard to support the national team,” he adds.

The Supreme Committee for Delivery and Legacy also rejected the allegations and issued a statement backing the contribution of these fans. It pointed out that there are several football fans in the country sharing emotional connections with various nations.

“In different places around the world, fans have different traditions, different ways to celebrate, and while that may contrast with what people are used to in Europe or South America, it doesn’t mean the passion for football is any less authentic,” the statement says.

The small peninsula is home to more than 750,000 Indians in the country’s population of 2.9 million. Qatar residents have been one of the top buyers of tickets purchased for the World Cup. Most of the tickets priced at €10.60 were grabbed by resident Indians. According to FIFA, Qatar alone has purchased 947,846 tickets for the tournament. Many Keralites have travelled to Qatar to watch the matches live.

Mohammed Rishwan K.S., an entrepreneur from Palakkad, bought tickets three months ago and has waited for the remarkable event ever since. He is among several fans in the state who are ardent football followers, even though the India team is 106th in FIFA’s ranking.

“I have watched three matches so far. All the eight stadiums are located within a 50-52 km radius of Doha and are easy to reach,” Rishwan says. He would have loved to stay back to watch more matches had he not “got some important commitments back home”, he adds.

Many streets of Kerala are now decked up with cut-outs, posters, and banners of every team. Houses, cars, and even auto rickshaws are painted in the colours of Brazil and Argentina. Fans get together to cheer the teams and sing anthems.

The craze is so high before every World Cup that half of the state supports Brazil while the other half backs Argentina.

This season also saw a musical tribute to the World Cup. Malayalam actor Mohanlal in collaboration with director T.K. Rajeev Kumar released a video, which throws light on the state's love for the sport.

But this love affair is nothing new. Back in 2018 as football fans headed to Russia, World Cup fever gripped the country, and one couple took their obsession a step further by choosing a football theme for their wedding.

As a supporter of Argentina, Jobin from Thrissur married Irene at a wedding hall decorated with balloons, festoons, bunting, and banners in blue and white.

The wedding cake resembled the Argentinian flag, and guests were served by staff wearing Argentina jerseys.

A cut-out war began in the state when Argentinian fans installed a nine-metre-tall cut-out of Messi on a small islet in Kurungattu Kadavu river in Pullavoor village in Kozhikode district. As a response, the rival Brazil fans set up a 12-metre-high image of Neymar Jr on the banks of the river.

Later, both were overshadowed by a 14-metre-tall model of Cristiano Ronaldo in his Portugal jersey. The cut-out war went viral and was tweeted by the FIFA official handle, “#FIFAWorldCup fever has hit Kerala”.

The cutout frenzy has its critics too. “Almost every main road and side street have tall cut-outs of the football stars. This has extended to the rivers too as every football fan club is on a thinking spree to outwit and overdo what its rival does. I wonder how we would be disposing of all the accumulated garbage once this frenzy is over,” Hariharan S., a visual artist from Palakkad said.

Sadly, the rivalry erupted into violence. Police made several arrests for unruly behaviour during rallies. There was also a clash between supporters of Argentina and Brazil during a parade in Kollam just before the start of the World Cup.

Videos on Twitter shows the supporters of both teams beating each other with flags, sticks, and iron pipes.

A group of 17 football fans from the small village of Mundakkamugal in the Kochi district purchased a house for €27,000 to watch the World Cup games with friends. The group includes supporters of Argentina, Brazil, Portugal, and France. They decorated the house with the flags of the 32 participating teams and adorned the walls with portraits of Messi and Neymar.

According to India's national news agency, ANI, Shafeer P.A., one of the buyers, said they "we will make arrangements for visitors of all generations to come here and enjoy the game together”. They have been celebrating every match for the past 15 years and want to continue.

It is not unusual for Kerala and its people to cling to the World Cup every season. The state in the cricket-crazy country is so obsessed with the game that even the government announced ‘One Million Goals’, a scheme to train school children in football.