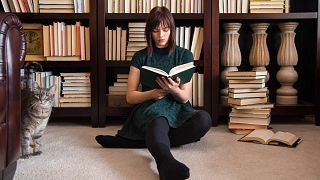 Got all your Christmas presents sorted?

Don't lie. Like many of us last-minute shoppers, it's always a mad scramble to buy those last remaining gifts for the silly season.

It's only 4 days until Christmas and books are always a good idea if inspiration doesn't strike. So, here is our helpful personalized guide to the very best 2022 had to offer in terms of literature.

For your friend who’s terminally online

Scorched Earth: Beyond the Digital Age to a Post-Capitalist World

“If there is a liveable and shared future on our planet, it will be a future offline.”

So starts Jonathan Crary’s essay ‘Scorched Earth’. Describing the dangers of the digital age, Crary paints a picture of a world where daily life has become regulated by a series of algorithms and every social interaction is monetised. In this hellscape the environment is dying and living standards are plummeting while a billionaire class rakes in more and more cash at our expense.

It will do nothing to cessate any Black Mirror-style creeping anxieties you have that everything is going horribly wrong.

According to Crary, we must turn the digital age into a footnote of human history, crafting a new world based offline if the human race is to have a hope of survival.

How do we do this? You’ll have to read the book - but spoiler alert: it involves logging off Twitter. In light of recent events, that may not be such a bad thing. Tim Gallagher

For the discerning music lover in your life

Rolling Stone: The 500 Greatest Albums of All Time

How does Taylor Swift’s '1989' album compare with John Coltrane’s 'A Love Supreme' and The Beatles 'Abbey Road'? If these questions keep you up at night, look no further: Rolling Stone’s recently updated 2022 edition book of The 500 Greatest Albums of All Time has some answers.

How is this list curated, I hear you ask? Well the book’s editors reached out to 500 figures from the world of music, including Beyonce, Nile Rodgers, Herbie Hancock and Billie Eilish, and asked them for their top 50 albums. Rolling Stone’s received 4000 albums in total and whittled them down to 500.

While offering unique critical commentary on each of the albums, the book also tells the stories of how they were made as well as showcasing stunning photography and archival interview material.

Not only would this be a perfect Christmas gift for any music enthusiasts in your life, looking to broaden their scope of listening, but also for anyone who loves a good coffee table book! Theo Farrant

For the person looking for a transcendent literary experience

If you are aware of Nick Cave’s mastery of language, his considerate nature, as well as the ongoing dialogue he has with his fans through his open forum, the Red Hand Files, you should have some inkling as to how intimate, devastating and ultimately uplifting this book will be.

Composed of dialogues Cave had with Irish journalist Seán O’Hagan (over 40 hours’ worth of interviews arranged in a Q&A format), the candid conversations in 'Faith, Hope and Carnage' focus on art, creativity, religion, addiction, lockdown, how vulnerability creates “invincibility”, and Cave’s life in the wake of the accidental death of his son Arthur in 2015. The book was completed before another personal tragedy struck: the afterword explains that Cave lost another son, 31-year-old Jethro, in May 2022, and the book is some indication as to why the artist hasn’t and can’t shut himself off to the world.

His disarming meditations on hope (“hope is optimism with a broken heart”) and grief (”It makes demands of us. It asks us to be empathetic”) aren’t just for fans of Nick Cave and the Bad Seeds; nor is this book a memoir or a completely sombre affair. It’s a balm, often featuring Cave’s droll sense of humour. But above all, 'Faith, Hope and Carnage' is a deeply thoughtful collection of ruminations into what it is to be alive. The reader emerges from its pages with a sense of humility but also great empathy; and for that, we should be very grateful. I certainly was, and it's comfortably my favourite book of the year. David Mouriquand

For your friend that’s into greenwashing

The Value of a Whale

Another year, another step closer to irreversible climate disaster... But try not to be negative, ok?

Your friends are ordering oat milk lattes and buying carbon offsets for their third mini-break of the year while the world's politicians make another ‘historic’ agreement to stop climate change... But somehow carbon emissions aren’t reducing. Like, at all.

In ‘The Value of a Whale’, Adrienne Buller picks apart the idea of green capitalism and points out the shortcomings of using the very market forces that cause climate change as a solution to it. Buller sets out the inherent colonial mindset of carbon markets and the problems of framing climate change as an economic issue; it makes for essential reading for anyone who thinks planting a tree will make up for their Shein hauls. Tim Gallagher

For the person looking to descend into a pit of despair

Naturally, I was excited for Yanagihara’s follow up. It arrived in characteristic door stopper form, clocking in at over 700 pages. This time, Yanagihara didn’t just have one novel though. This year’s ‘To Paradise’ was three novels all connected by a single address in Washington Square, New York.

Set across three centuries, the novels explore the inhabitants of the addresses lives across the years 1893, 1993 and 2093. And… the first two parts were kind of duds. As much as this is a recommendation of the year’s best books, it would be disingenuous to pretend that the first 300 or so pages are actually all that good. They plod along in the late 19th and 20th centuries and tell fine stories, but they don’t bring the cataclysmic misanthropy that Yanagihara made her name with on ‘A Little Life’.

And then you reach the third novel. Set across the next hundred years, it tells the story of how New York has descended into a dystopia of endless pandemics, relentless climate change, and unbearable government scrutiny. The weaponised despair of ‘A Little Life’ focused on the destruction of a single undeserving man. In ‘To Paradise’, Yanagihara serves up the same treatment but this time for all of humanity over the next century. Her vision of our future is bleak, but unlike other dystopias, this one feels fully realised for a potential future we can’t help but avoid. If Yanagihara is even slightly correct in her predictions, then the one place we are certainly heading is not to paradise. Jonny Walfisz

For the person playing catch up with the Nobel

French author Annie Ernaux won this year's Nobel Prize in Literature “for the courage and clinical acuity with which she uncovers the roots, estrangements and collective restraints of personal memory”. Which is a fancy way for the Swedish Academy to say that she’s a damn fine writer who you should get to know, better late than never.

The distinction given to Ernaux, 82, also couldn’t have been timelier, especially in a year in which the US Supreme Court overturned Roe v Wade and set society back by decades – to mention one of many attacks on the reproductive and sexual freedoms of women this year.

Ernaux’s books often present uncompromising portraits of sexual encounters, abortion and illness, in a style she describes as “flat writing” ("ecriture plate"), delivering a very objective view of the events she is describing, unshaped by florid description or overwhelming emotions.

While there are many books to recommend in her oeuvre, one unmissable one is her bestselling autobiographical novel 'L'Événement' ('Happening' - 2000). Written in her signature raw style, she pulls back the curtain on French abortion laws (when abortion was still illegal in France, until the liberalized law passed in 1975) and the terrible consequences they entailed. She not only describes how she nearly died after finding a backstreet abortionist, but uses the topic of abortion to paint a picture of society’s attitudes towards working class women. It’s a landmark piece of writing and, like the film adaptation - which won the Golden Lion in Venice in 2021 – it never stumbles into didacticism. Ernaux simply but vitally states that freedoms have been denied to women and that removing a person’s right to choose is tantamount to madness.

The book may have been published 22 years ago, but remains depressingly topical and a vital read in 2022. David Mouriquand

For the ones missing Hillary Mantel

This year the world lost arguably one of its greatest living authors: Hillary Mantel.

Mantel was best known for her multiple Booker Prize-winning series ‘Wolf Hall’ and this, along with her work on the French revolution, ‘A Place of Greater Safety,’ means many think of her as the woman that revamped the genre of historical fiction.

Outside of this genre, Mantel was a talented essayist, with the seminal ‘Some Girls Want Out: Spectacular Saintliness’ circulating on her death. Mantel’s magical realist ‘Beyond Black,’ the story of a medium battling childhood trauma, is a must-read in terms of her earlier work, and offers a moving meditation on memory, grief and loneliness.

The book takes on a new dimension in light of the author’s death, while the lead character’s struggles with her own body chime poignantly with Mantel’s life story. Tim Gallagher

For cinephile who likes to eat what they watch

Eat What You Watch: A Cookbook for Movie Lovers

I'm cheating a little bit with this one, as it wasn’t released this year. However, no book has come anywhere close to capturing the merged joys of cinema and cooking quite like cook-cinephile-author Andrew Rea’s 'Eat What You Watch: A Cookbook for Movie Lovers.' It’s the perfect book if you’ve ever seen a dish on screen that’s left you with a massive, stomach-rumbling craving. And it makes for a cracking Christmas present. It's how I got my copy.

Rea is the man behind the brilliant Binging With Babish YouTube channel and known for its recreations of popular meals and snacks from movies and TV. With this recipe book, he caters to both movie buffs and practitioners of the dark culinary arts, and ensures that anyone can make those mouth-watering silver screen meals at home.

With more than 40 recipes from classic and cult films – succinctly and accurately written in a handy step-by-step manner so that even the most novice of cooks can’t foul it up too badly – you’ll find cooking tricks and improved versions of the recipe. Rea has also released a longer version – 'Binging With Babish: 100 Recipes Recreated from Your Favourite Movies and TV Shows' – should you wish to take things one step further.

So, whether you want to make Friends’ infamous Moistmaker sandwich, are curious if you can (and should) slice garlic with a razor blade and liquify it in tomato sauce like in Goodfellas, ace Ratatouille ’s ratatouille (or more accurately: Confit Byaldi, you filthy heathens) or prepare the now-iconic Ram-Don dish from Parasite, this book is must-have. David Mouriquand

Iceland's festive traditions and why they've stood the test of time