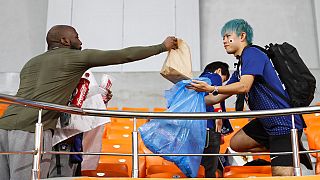 The football World Cup in Qatar has been full of surprises on the pitch but there has also been exceptional behaviour off the field among fans.

Much to the locals' delight, some supporters have chosen to wear traditional Qatari clothing in and around stadiums. But, perhaps the most welcome gesture is that of Japan fans.

Win, lose or draw, the Japanese spend time after each match picking up rubbish in the stands.

Their cleaning habit is driving social media posts during the tournament, but it's nothing unusual for Japanese fans or players, who are known to tidy up the team dressing room and leave thank-you notes.

Japan's Football Association supplied 8,000 blue rubbish bags to fans, which fittingly colour the stadiums for the 'Samurai Blue', and each bag is covered with "thank you" messages written in Arabic, Japanese, and English.

In July 2018, Japanese fans and football players already won plaudits after they were seen collecting trash during FIFA World Cup matches in Russia.

While Japan may exit the tournament today with defeat against Croatia, the fans and players will hopefully leave a lasting impact on all followers of the beautiful game.