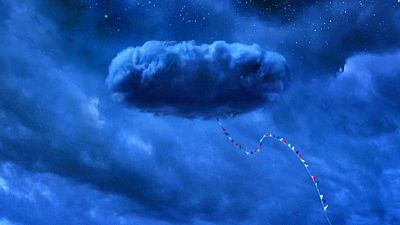 Jordan Peele’s Nope has begun its international rollout in most European territories this month. But beyond already impressive box-office numbers, there’s another reason to get excited about Peele's new film after Get Out and Us: the way it portrays aliens.

If you were asked to sketch an alien, what would you draw?

In all likelihood, a creature not too dissimilar from the way humans look: arms, legs, a disproportionately huge pear-shaped head with big googly eyes…

But why would beings from another planet or universe look anything like us?

It’s common enough to project relatable human features to that which we don’t know or comprehend. Our shared image of aliens boils down to a defence mechanism that reassures us, as well as the fact that this anthropomorphised depiction of extraterrestrials has been fed to us over time through films and TV series.

In effect, a lot of our visual cues can be traced back to the influence of cinematic imagination: filmmakers have shaped our perception of the unknown. From George Méliès’ first moon dwellers in 1902’s A Trip To The Moon to Spielberg’s E.T. and the big brained invaders in Mars Attacks!, we recognise these alien beings through visual shorthand.

But sometimes, what we see on screen destabilizes our notions of alien lifeforms and contributes to evolving the portrayals we’ve been used to within the sci-fi genre.

Jordan Peele’s latest film after the Oscar-winning Get Out and doppelganger chiller Us is one of this year’s most anticipated releases and is proving to be one of its most divisive.

The story merges sci-fi tropes, Western codes and horror elements into one ambitious whole that sparks the same sense of wonder that Peele’s genre predecessors have achieved - most notably Close Encounters of the Third Kind.

We here at Euronews Culture aren’t in the spoiling business, so the less said the better – Nope is a film that should be experienced knowing the bare minimum about its plot developments. That said, anyone who’s seen the depressingly spoilerific trailers, which partly ruin one big reveal, knows that there’s a UFO component to the central narrative, a “bad miracle” which allows Peele to tackle themes of Hollywood exploitation, animal rights, and many more.

What’s most thrilling is that Nope is one of those rare films that indirectly addresses the way we imagine the spectacle of our would-be abductors. The alien aesthetic in this film is not only surprising, but audaciously challenging and borderline kaleidoscopic. The effect is something truly awe-inspiring.

To mark this - as well as the fact the film has secured the biggest opening weekend for an original, R-rated film since the pandemic began and already surpassed $100 million at the US domestic box office - here are the other times filmmakers have pushed the alien envelope in popular culture.

These are films that have delivered an on-screen representation of aliens that go beyond variations of stereotypical little green men (E.T., Paul), human-shaped visitors from outer space (The Day The Earth Stood Still, The Man Who Fell To Earth) and anthropomorphic beasties (Independence Day, the Alien franchise’s xenomorphs) designed to make audiences invest in adult Pampers.

The intergalactic antagonist in Irvin Yeaworth’s original 50s classic The Blob is exactly that: a gelatinous lump that remains terrifying to this day because of its amorphous nature.

The silent carnivorous alien crash lands on Earth in a meteor and latches itself onto living hosts, which it absorbs before oozing on to its next victim. The more it eats, the bigger it grows. Plans to electrocute it fail and even if our protagonists manage to freeze the creature and cargo-lift it to the Artic, the cold only stops the Blob; it doesn’t kill it. This realisation – interpreted by many was a metaphor for the Cold War and therefore casting the Blob as the embodiment of communism – is met with the words ‘The End’, which then morph into a question mark before the end credits roll.

The gooey jelly shape of the alien is a strong case for "simple is best". That and restrictions engendering inventivity. Without much budget to play with and facing technical limitations, the special effects team at Valley Forge Films had to make do. They made the Blob from silicone and added red vegetable dye when it absorbed its victims. They also used miniature sets, superimposed slime over photographs, and made the most of time-lapse photography to speed up movements.

It’s an effective and terrifying image of an unknown species, which, much like Peele’s bizarre creature in Nope, upends audience expectations and keeps you guessing as to the limits of its physical form and capacities.

Several other depictions of aliens were inspired by the slimy creature, including the black oil substance in The X Files, which revealed itself to be the extraterrestrial life-force in the long running TV show. Later on, the Alien prequels would follow suit with the harmful liquid at the heart of Prometheus and Covenant, and Venom's symbiote is a direct descendent of The Blob's parasitic goop.

One of the most striking and bizarre forms aliens have taken on screen is the enigmatic black block at the heart of Stanley Kubrick’s sci-fi classic 2001: A Space Odyssey.

Whether or not the mysterious monolith that suddenly appears is the actual form of the aliens is debatable. It might be a calling-card signalling that they are present. What we do know, however, is that the towering column serves as a warning, a teacher facilitating evolutionary leaps, and a mysterious gateway that poses more questions than it answers.

Originally described in Arthur C. Clark’s short story ‘The Sentinel’ as a pyramid, the geometric shape is a stroke of genius in terms of imagining first contact with an advanced lifeform. Kubrick revealed in an interview that the lack of a typical alien presence was important to the filmmaker: “From the very outset of work on the film we all discussed means of photographically depicting an extraterrestrial creature in a manner that would be as mind-boggling as the being itself."

This taps a Lovecraftian vein. Indeed, the fantasy author believed that the strongest kind of fear was the fear of the unknown and that the power of imagination trumps anything that can be physically represented. In essence, our tiny human minds cannot fully comprehend any embodiment of advanced life.

Regarding his alien portrayal as a black slab, Kubrick echoed this sentiment: “It soon became apparent that you cannot imagine the unimaginable.” The monolith represents this unimaginable, a bone-chilling unknown whose simple geometry innovates through paradoxically brushing aside wilder, more garish depictions of visitors from other worlds.

Released on the same year as E.T. phoned home, John Carpenter’s horror classic The Thing took a page out of Invasion of the Body Snatcher’s book, in that the deadly alien can hide in plain sight.

The 1978 remake of Invasion of the Body Snatchers saw an alien race literally becoming you and disposing of your old carcass. In The Thing, the alien lifeform is an undefinable organism that can mimic others: your pet dog, your friend, your colleague... And then, just for kicks-and-giggles, it contorts its body, stretches its head clean off, and grows spider-legs.

This nightmare fuel was a disturbing stroke of genius, chiefly because the lack of a definitive shape buttresses the paranoia in every scene, leaving audiences trembling at the realisation that there isn’t much this monster can’t do or assume the shape of.

Plaudits go to the special effects team, led by Rob Bottin, who used practical effects to create the shapeshifter’s gory declinations, to ground-breaking effect. This remains an alien depiction that thrives on unpredictability, an unnerving trait that is scarier than any scaly monster or long-limbed beastie.

Out with the existential head-trips and gory impersonators, and back to basics with Attack The Block.

The main source of inspiration for the alien critters in Joe Cornish’s sci-fi comedy is animal. And why not? Aliens could conceivably have more in common with fauna than anthropoids.

Attack The Block sees horrifying creatures descend on a South London council estate, seeking to get their teeth into anything that moves. In aspect, they look like gorillas with spiky fur, sharp claws, and a mouthful of bioluminescent teeth; that last detail makes their fangs contrast quite strikingly with all their black fur.

The animalistic nature of the aliens is simple but effective: it echoes the fear that King Kong instilled in 1933 (and later in 2005) and leans into a raw viciousness that can’t be reasoned with.

Not unlike the giant tripods in War of the Worlds or the towering squid monsters in Gareth Edwards’ criminally underseen 2011 sci-fi gem Monsters, the way the aliens in Arrival are portrayed sticks to a certain Lovecraftian tradition.

Our vision is obscured and we only see what linguist Dr Louise Banks (Amy Adams) witnesses: only the very bottom quarter of the aliens, who look like the unholy offspring of a whale and an elephant brought up by the Grim Reaper. Unlike their giant pebble-shaped spaceship which we see in full, our lack of a full view of the heptopods is incredibly destabilising, as we could be seeing only a minuscule percentage of the overall creatures. Plus, the possibility that we might ant-sized compared to other beings tends to instill some fear...

While many on-screen aliens communicate with humans via their own language or telepathy, the creatures in Dennis Villeneuve’s time-bending masterpiece use an ink-like substance emanating from their tentacles to draw their language. A visual clue that shows how they experience life and time as a flat circle.

Villeneuve and his screenwriter Eric Heisserer (basing the script on Ted Chiang’s fantastic novella ‘Story of Your Life’) explore the limits of the Sapir-Whorf Hypothesis, which posits that language either determines or influences one’s thought and perceptions. The way the aliens are filmed mirrors our own incomprehension and confusion when it comes to communication.

Arrival is thought-provoking cinema at its best, one that challenges how we perceive our intergalactic counterparts on both a physical and psychological level. It represents an impressive evolution of on-screen aliens within the sci-fi genre, revealing them as being light-years away from the harbingers of doom so many flicks lazily depict.

Nope is out in cinemas now and continuing its international release rollout during the month of August.

What's Jordan Peele's 'Nope' horror about and when is it released?