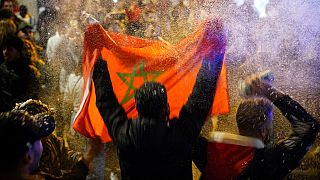 A man waves a Moroccan flag after the team's World Cup win over Spain   -   Copyright  Andrea Comas/AP 2022
The opinions expressed in this article are those of the author and do not represent in any way the editorial position of Euronews.
By Fatiha Hajjat  •  Updated: 16/12/2022

It's been a little over 48-hours and I'm still buzzing. As it seems is much of the Moroccan capital, from where I write.

With only six football matches, Morocco’s Atlas Lions have managed to do what hundreds of highly paid consultants and think tanks have failed to achieve in many years: unite Moroccans around a common goal and show the world the essence of Moroccan-ness. This year’s World Cup in Qatar has kickstarted a new relationship with the land of my forebearers. I usually don’t care about football, nor do many of my peers, but the representation and political turn it took captivated me.

My family hails from Morocco. A decade ago, I left London to join a Rabat-based diaspora outreach institution created by royal decree in the hope of building a “New Morocco”.

First-generation immigrants like my father were attached to their home country and remittances were an essential pillar to the Moroccan economy. But with me and my peers of a new generation, born on foreign land, the dynamic was changing. What would make us want to go back to our parents’ home country and participate in its economy? What measures, policies and incentives could the Chérifien Kingdom put in place to create a sense of patriotic (and cash-generating) belonging? I wanted to sit at the table and be part of this game-changing conversation. The work experience and social understanding I had gained in France and in the UK was relevant to it, and I was eager to contribute my know-how.

The drama and hogra that I encountered jolted me.

Hogra in Darija (the Arabic dialect spoken in Morocco) means discrimination, social disdain. Despite many statements on how MREs (French acronym for Moroccans Living Abroad) were as Moroccan as those living in the country, I was denigrated and rejected. My competence and skills were challenged, and I was reminded that I didn’t belong and did not understand the “codes”. My accent and short garçonne hairstyle betrayed me everywhere I went. I was called a zmagri or beurette, which are both derogatory identity-terms. The first is used to belittle working-class immigrants; the other to describe girls of Maghreb ethnicity and also a French porn category.

Ironically, I was too French for the Moroccans and too Moroccan for the French. Le cul entre deux chaises, as they say: to sit between two stools.

As the Lions were climbing the competition ladder in a David-vs-Goliath-like battle, Morocco welcomed me in its team as their virtual twelfth player, alongside its misfits and their inspiring and bold coach, Walid Regragui, a dual nationality born in a French suburb like me. Finally, I was offered a glimpse of hope.

If the conditions are right, dual citizens can bring their competence to the country that birthed their parents, if they wish to. Then: Hello again “New Morocco”!

Does being attached to your parents’ mother country mean that you spit on your own mother country? Is that choice discriminating? Surely not.

What the Morocco squad has demonstrated, through both the backgrounds and the current club affiliations of many players, is that identity, belonging and attachment are too complex and subtle to be left in the hands of never-ending study commissions and hate-filled polemicists. By framing it with an or rather than an and, we miss on the richness that it can bring to societies.

“What did you learn from this World Cup?” we asked. He answered in perfect French: “Je peux devenir ce à quoi j’aspire” – I, too, can become who I aspire to be.

In Rabat, my Moroccan-born friend Ilham, a university lecturer, was in tears when the Atlas Lions lost their semi-final against France on Wednesday, in a mix of joy and sadness.

“Never had I imagined that I would feel what the people who did the Marche Verte felt”, she told me referring to the 1975 mass demonstration. She felt “a sense of pride and greatness”.

Her dual-national 10-year-old son Anir is inconsolable, however. He framed the pictures of three of his favourite players with a handwritten note: “Allah. The Nation. The King”.

“What did you learn from this World Cup?” we asked.

He answered in impeccable French: “Je peux devenir ce à quoi j’aspire” – I, too, can become who I aspire to be.

The Moroccan team will now face Croatia in the 3rd place playoff on Saturday, but they have already triumphed by changing the narrative and inspiring millions to dream big. Representation matters. A Muslim, African, Arab Berber country can make its way to the best tier, with hard work, collective spirit and an undefeatable dream. Call it the Moroccan dream, made of inclusion, resilience, misfits, mothers rejoicing on the field, supportive chants from Palestinian camps to migrants in the French street camps and other outcasts around the globe.

This football World Cup offered Morocco a fantastic soft power opportunity, worth more than any PR or advertising budget. Hundreds of dual citizens can now imagine travelling in the opposite direction than their parents did in the 1960s and 70s. Moroccan-ness is “in”. Morocco is a new land of opportunities.

Morocco, the ball is now in your camp. We are watching.

Fatiha Hajjat is a communication and empowerment strategist , ideas curator and founder of TEDxLyon.