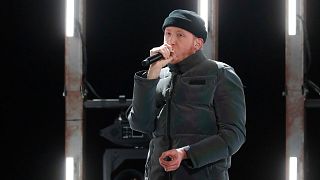 The Paris Criminal Court has given suspended sentences to 11 people who harassed French singer Eddy de Pretto online after a concert at a Parisian church in June 2021.

The group were handed terms ranging from three to six months in prison.

These young men were sentenced for messages describing the artist as a "gigantic faggot" and accusing him of having "defiled" their Catholic faith by performing a song evoking homosexuality in the Saint-Eustache church, in the heart of the capital.

"Abuse of freedom of expression"

During the trial in early November, the 29-year-old singer-songwriter, best known for his hit songs Fête de trop and Kid, came to testify about the devastating impact of the approximately 3,000 messages that had targeted him on social networks after his concert.

"We will be there on each date to remind you that the army of God does not leave this kind of blasphemy unpunished", "big shit bag to defile our religion", "down with the Republic which makes us sub-humans of this species", read some of these posts on Instagram.

"I was very afraid to leave my house, sleep disorders (...) depressive disorders, I could not understand this violence", testified Pretto.

Presenting very mixed profiles but claiming, for the most part, their attachment to Catholicism, the defendants had claimed to have felt "humiliated" by the term "sodomite" used by Eddy de Pretto in one of the songs performed in the church of Saint -Eustace.

Some had also tried to justify themselves by rejecting any violent intention and by putting forward their desire to set up "a legal framework" for "the defence of our society".

During the hearing, the prosecutor described their messages as an "abuse of freedom of expression" and recalled that "blasphemy and attacks on religion are not punishable by law".

Eddy de Pretto is "very satisfied" with the court's decision, one of his lawyers, Me Martin Lémery, told the press outside the tribunal.

"The court recalls that one cannot with impunity engage in the digital lynching of a person whose public commitments, sexual orientation or personality have had the misfortune to offend certain extremists", he added.

Putting into perspective the importance of the releases, the lawyer expressed the wish that this decision could "be a new stone in the jurisprudential building in the fight against discrimination and harassment of packs on the internet".