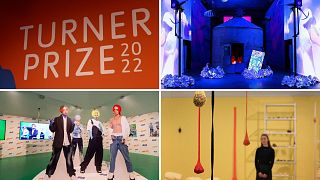 The winner of the Turner Prize 2022  will be announced tonight!

If you're not already aware, the Turner Prize is arguably the most prestigious contemporary award given to an artist, born or based in the UK, for an outstanding exhibition of presentation.

Let's take a closer look at the four nominee's work:

She describes her works as ‘quantum thought experiments’.

For the Turner Prize, Phillipson is showing a reimagination of her 2020 Tate Britain Duvet Galleries commission, which she describes as ‘a maladaptive ecosystem, an insistent atmosphere’.

The work is a truly immersive and psychedelic experience - featuring LED lights, ambient soundscapes, large screens showing the beady eyes of different animals, projections of clouds and birds on the walls, and a corrugated iron shack housing a series of hanging gas canisters.

It feels like the ominous set of an apocalypse movie.

Veronica Ryan, a Montserrat-born British sculptor, has been nominated for her solo exhibition Along a Spectrum at Spike Island, Bristol and her Hackney Windrush Art Commission in London.

Here she transforms the gallery space into a yellow chamber with a series of long crocheted sacks dangling from the ceiling.

Each sack contains often overlooked items, such as shells, seeds, fruit and avocado stones - recalling Ryan's childhood memories as well as the history of global trade.

Through other objects, such as stained medical pillows, bandages and tables laid with fish shells, Ryan further explores her own family history and themes such as healing and recovery, and the psychological impact of the pandemic.

"The jury were struck by the exquisite sensuality and tactility of her sculptures, both in the gallery and for the public commission in Hackney," explains Tate Liverpool.

Non-binary Canadian artist, Sin Wai Kai, has been nominated for their involvement in the British Art Show 9 and their solo presentation at Blindspot Gallery, Frieze London.

Their work brings fantasy to life through storytelling in performance, moving image, writing, and print. It creates fictional narratives in order to reflect on lived realities of desire, identification and consciousness.

Through a series of films, Sin parodies everything from TikTok, to Chinese television, to the strange phenomenon of boy bands. And Sin play all the parts - using wigs, makeup and prosthetics.

The standout of the show is Sin's made up four-piece boy band - which is presented in the form of cardboard cut outs and music videos.

"I think a boy band is a really perfect medium to think about how identities are constructed," Sin has said.

"You have the sexy one, you have the serious one, the playful one, and this kind of individualisation of the characters is played up often for marketing purposes. But they can't exist on their own."

Pollard, who made her name as a photographer, uses image, sculpture, film and sound to question our relationship with the natural world and interrogates ideas such as Britishness, race and sexuality.

The 69-year old artist has been nominated for the Turner Prize for her solo exhibition Carbon Slowly Turning at MK Gallery in Milton Keynes.

One section of her Turner Prize room is taken up with "a study of what she calls racism hidden in plain sight" - featuring photographic shots of the many pubs, buildings and street signs named 'Black Boy' in the UK.

At the other end of her room is a trio of moving anthropomorphic sculptures created by Pollard in collaboration with artist Oliver Smart. The monstrous machines are made out of various everyday objects, including old saws, a bicycle and a baseball bat.

"With the sculptures’ repeated mechanical sound and movement, they seem to be deferential as well as threatening," explains Tate Liverpool.

The exhibition runs at the Tate Liverpool until 19 March 2023.