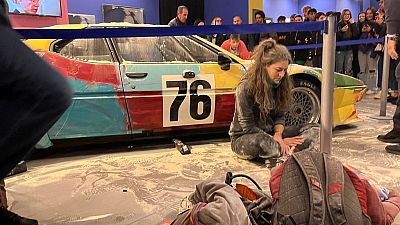 They doused 8kg of flour on a car that had been decorated by the late American artist.

The protestors said their aim was to call for a stop to the re-opening of coal-fired power stations and to demand an end to natural gas exploration.

Security officials tackled the women at the Fabbrica del Vapore in Milan and they were subsequently taken to a police station for questioning.

As she was led away, one of the women shouted: “My daughters, my students will soon be in danger from droughts, famines, migrations caused by climate change”.

Read our interview with Just Stop Oil, who defended their actions and the right to attack art, and check out the video above for footage of the Warhol car attack.