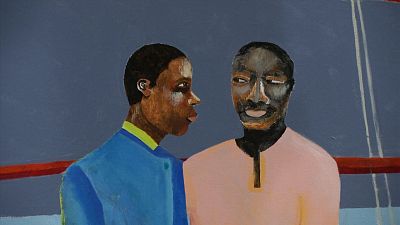 She's been a pivotal figure in the Black British arts movement for decades.

From tomorrow, London's Tate Modern will be showcasing Lubaina Himid – a creator, curator, and the first Black woman to ever win the Turner prize – in her biggest exhibition to date.

There are 50 works, covering her most famous paintings, poetry, everyday objects that she has transformed with her signature bright style, even sound installations.

Himid is most famous for her vividly-coloured figurative paintings that centre Black characters.

But there's much more to the veteran artist – and this solo exhibition hopes to showcase her full breadth.

"This is an exciting opportunity for the public to see the largest show of Lubaina Himid's work," says curator Michael Wellen.

"She's been working since the 1980s, is best known for painting, and she paints not only on canvas, but on all sorts of materials: on furniture, on ceramics, on cutouts that she's made. And this is an opportunity to be immersed in her painting."

Himid is currently a Professor of Modern Art at the University of Central Lancashire. Her work has appeared over the years at Berlin's Biennale, London's Tate Britain, and the Glasgow International Festival in Scotland.

This exhibit asks viewers to consider several questions: From the whimsical 'what does love sound like?' to the practical issue of whether the clothes we wear and buildings we live in actually fit us.

After close to two years of living in a pandemic, some of these queries are more relevant than ever, says assistant curator Amrita Dhallu.

"This exhibition is a super important one, because it really seeks to place the audience at the centre of all of its action," she explains.

"Especially after the kind of year that we've had this year, it seems so important because it asks of us lots of questions about our daily encounters with everything that shapes and changes our lives."

'Getting the recognition she deserves'

At the start of her career, Himid felt Black artists were largely ignored by the rest of the world.

"I think we have seen a major change in the recognition of Black artists, we've seen it at Tate with Frank Bowling a few years ago, him getting a retrospective after many, many decades of producing work, and we're seeing it more and more," says Tabish Khan, art critic for The Londonist.

"It's a positive step. We need to see more of Black artists and wider representation within Tate exhibitions."

For Khan, this exhibit is a chance to understand the artist better.

"She is the oldest person to have won the Turner Prize, and she's got many decades of creating work without getting the recognition she deserves, which she's getting through this show," he says.

"But it's great to see such a variety of her work because if you just see an individual painting, you won't be able to put her work into context. While here we have references to theatre, there's poetry on the walls, there are paintings and there's music as well."

Watch the video above to delve into what Lubaina Himid's exhibition has to offer.

Kew Gardens' Christmas illuminations trail is sold out until January