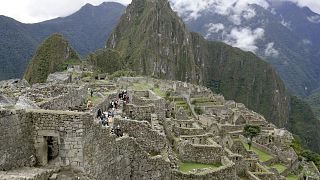 Now ratified by 194 countries, the list features more than 1,100 sites, from the Machu Picchu in Peru to the Acropolis of Athens in Greece.

"On 16 November 1972, this important text (Convention Concerning the Protection of the World Cultural and Natural Heritage) was adopted - which has a very nice preamble and very precise articles and among them the need to create a list of sites which would be recognized as the most important sites of humanity, allowing the international community to act very quickly to preserve them in the face of (natural) disasters, in the face of conflicts, in the face of other development issues," he says.

Most of the sites are in popular tourist destinations.

Some countries have more than 50 sites, but others - like 12 African countries - have none.

"Out of a World Heritage list of 1,154 sites, almost half of these sites are mostly located in the Europe and North America region," says Eloundou Assomo.

"Globally, one of the least represented regions on the World Heritage List is sub-Saharan Africa and then the Arab States. So, there is indeed an imbalance in terms of statistics on the list and this is an issue on which we will continue to work together with the member states."

The double-edged sword of tourism

The recognition usually benefits the area with increased tourism, but this perk can be a double-edged sword.

"When we talk about visited sites, we are talking about where tourism is much more present. And these sites, which are the most visited, for the most part, are certainly in regions like in Europe, like in North America. Many sites are also visited in Asia, and we know that tourism brings a lot to the development of sites, but also creates new jobs and helps with the well-being of populations, because it is precisely in development. But tourism can also be, when it is mass tourism, a factor of concern for World Heritage sites," says Eloundou Assomo.

On the list, 52 sites are currently categorized as 'in danger.'

Eloundou Assomo gives an example on the African continent.

"In Africa, we will take the Virunga National Park which is a park. There are, for example, very important endemic species, like the last mountain gorillas and many others," he says.

As UNESCO celebrates the 50th anniversary of the convention in Delphi, Greece, the organization wants to stay true to its founding principle.

"It is important that the world heritage sites do not lose their value for the role they play and that we work together so that they can be preserved today and passed on to future generations who will continue to preserve them," says Eloundou Assomo.

UNESCO is expected to announce an action plan for the future of the World Heritage Convention to make the list more representative and make the sites more accessible and sustainable.