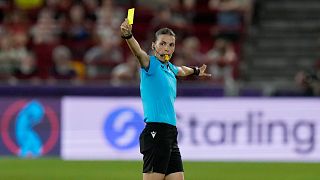 The first ever all-female referee team to take charge of a men's World Cup match will be in action tonight as Costa Rica face Germany in their crucial Group E encounter. (Thursday 1 December).

Stephanie Frappart will be the main arbiter with Neuza Back and Karen Diaz as the assistants.

Frappart, was the fourth official for the Poland-Mexico Group C match last week.

"I felt enormous emotion because it wasn't particularly expected, that I would be picked," said the 38 year-old French official. "So, I feel a lot of pride, a lot of honour, to represent France at the World Cup."

"I think I'll have everything that's around me in mind, and the aim will still be the same, that is to referee according to the performance on the pitch," Frappart added.

"We all have all earned the position to be here"

"I am a deep admirer of everything that women have achieved. And I like that they want to keep achieving more," he told reporters.

"This is another step and I think it is important. It shows how good women are, how dedicated they are and how they can do things - especially in a male chauvinist sport like this - how far they can go. I am pleased."

In total, six female referees were selected to call games for the Qatar 2022 World Cup. They were all made to pass the same fitness tests as their male colleagues and are held to the same performance standards.

"We have all earned the position to be here... we are one team," said American Kathryn Nesbitt, one of the six female referees selected.

World Cup fans gather in Doha square ahead of games