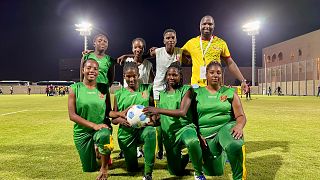 If football was a language, it would be spoken more widely than English and Arabic and inspires millions worldwide. In Zimbabwe, football is an escape from the harsh realities of life, and it motivates young people to aim higher.

Ruth James is from a deprived community on the outskirts of Harare. The 15-year-old has always loved football and dreams of playing professionally. Ruth plays football with a local organisation called Young Achievement Sports for Development. YASD is a community-based sports mentorship programme that helps poor and vulnerable communities in Zimbabwe.

"I heard about the team from YASD. I went along to play with them, and when I did, they thought I was very good, and that's when I decided to join," Ruth says.

Zimbabwe's economy has been in a recession for over a decade. According to a World Bank report, almost half of Zimbabwe's population fell into extreme poverty in the last ten years, with children suffering more than any other age group.

Joe Quocirca, the communications officer for YASD, explains that many of the girls in the program come from poor and vulnerable backgrounds. "The major thing we see is early childhood marriage," Joe tells Scenes. "It's easy for a girl to become a mother at an early age. It's easy for a young girl to get into prostitution," he says.

Zandile Dossantos, a 14-year-old member of the YASD programme, says, "I saw joining the team as an opportunity to build something. YASD has helped many young women; it took me out of a lot of negative places," she says. Zandile explains that while many other young women saw football as a waste of time, she saw it as an opportunity to grow and develop.

Football in Zimbabwe is not a sport typically associated with women. The girl's team had to defy stereotypes to succeed. "The fact that people say soccer is only for boys pushed me to want to join the soccer team with other girls so that people can see that anyone can play soccer," Ruth tells Scenes.

In the Harare community, life can be challenging for everyone, especially for girls, and the YASD programme wanted to give young women a goal to work towards. Joe Quocirca, a communications officer at YASD, says his organisation learned about the international football tournament, Street Child World Cup, two years ago.

"I would have never thought, especially with the lives that we have, that we would ever travel out of the country," she says.

The prospect of travelling abroad was exciting, but many girls needed travel documents. "It was a challenge to get their documentation to travel," says Joe. "Some team members failed to make it to Qatar because of this issue," he adds.

The tournament was a source of joy for Zimbabwean girls, even though they didn't win. Despite winning a match, the girls drew another and lost two more. "I was disappointed; I really wanted us to win because we came to play soccer," Gamuchirai says.

The trip to Qatar was essential for these girls, and Joe believes it goes beyond football. "We think this is going to transform them. When they return to Zimbabwe, they will want to do more and be inspired to share their stories with other girls," he says.

The experience has helped strengthen the team's resolve, and Joe thinks the girls have a bright future ahead of them. "The young girls have inspired us with the drive that they have. Apart from just playing in the Street Child World Cup, the girls want to see their lives transforming and changing," Joe says.

This inspiring team of young women is ready to take on the world through their passion and commitment to the sport. Together, they are kicking down hurdles in their lives, making way for more young women in Zimbabwe to do the same.

Germany crash out of World Cup despite victory over Costa Rica