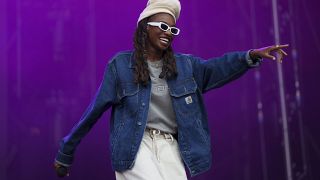 Little Simz has scooped up this year's prestigious Mercury Prize 2022 for her fourth studio album, 'Sometimes I Might Be Introvert', a cinematic and funky hip-hop exploration of her life and experiences.

The Mercury Prize is designed to celebrate artistic merit throughout many contemporary genres of music from British and Irish talent, with past winners including Michael Kiwanuka, Wolf Alice, Skepta and Arlo Parks.

Upon receiving her award on stage, the 28-year-old rapper said she was "very overwhelmed and grateful" to receive the honour.

She also gave a shoutout to her fellow 12 other nominees, including Joy Crookes, Sam Fender, Wet Leg and Harry Styles.

"We all made incredible albums, we all changed people's lives with our music, and that's the most important thing," she said on stage.

The win marks the end of a hugely successful year for Little Simz, who also won the Brit Award for Best New Artist earlier this year.

The rise of Little Simz

The North London-born rapper Simbiatu Ajikawo, known by her stage name Little Simz, had already been slowly building her reputation as an undeniable talent long before the release of her widely acclaimed project, 'Sometimes I Might Be Introvert'.

In 2015, at 21-years-old, she released her first full-length album 'A Curious Tale of Trials + Persons', following the release of five EPs and four mixtapes, all on her own independent label, Age 101 Music.

She established herself as one to watch in the scene - her intelligent lyricism and sharp flow drawing comparisons to the likes of Kendrick Lamar and Lauryn Hill.

Lamar himself even described her in a 2017 interview as “the illest doing it right now."

Simz then made her Glastonbury debut in 2016 and dropped 'Stillness in Wonderland', an album inspired by Alice's Adventures in Wonderland.

It was her third album 'Grey Area' (2019) where she started to gain widespread critical acclaim, receiving her first Mercury Prize nomination and winning the Best Album awards at both the Ivor Novello Awards and NME Awards.

The extraordinary 'Sometimes I Might Be Introvert' wasreleased on 3 September 2021 and debuted at number 4 on the UK album charts.

Many publications deemed it the best album of 2021 for its introspective storytelling and rich musicality.

The album was nominated for the Brit Award for British Album of the Year and was included in Rolling Stone's ranking of the 200 Greatest Hip-Hop Albums of All Time.

Aside from her rapping abilities, Little Simz is also known for her leading role as Shelley in the third season of Netflix's hit show Top Boy.

She even made a cameo as herself in the 2021 superhero film Venom: Let There Be Carnage, which features her (unrelated) 2019 single 'Venom' on the soundtrack.