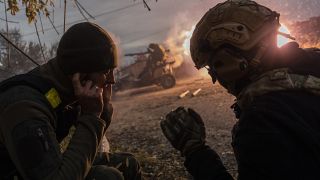 A Ukrainian film festival in California will come to the UK and Ukraine this weekend.

The film festival hosted its first event in California on November 20, boasting a range of Ukrainian-made short films, an NFT exhibition and a fundraiser for medical assistance in the war-torn country.

Now, the Ukraine FilmFest will be rolled out in Europe, on 26 November. First, an event in Kyiv at Unit.City, and then screenings and a charity event at Picturehouse Central in London.

“I am Ukrainian and I love films. That's why for the event it was important to collect different topics and messages from Ukrainian filmmakers to show our creative industry from different angles to the Hollywood audience,” says EnoughTea Foundation director, Anzhelika Hrokholska.

The fundraising effort behind the festival

The EnoughTea Foundation organised the festival. It believes the government itself is the best source to know where money is most effectively spent in fighting the war against Russia.

For the festival, EnoughTea Foundation has teamed up with UNITED24, the fundraising platform launched by Ukraine President Volodymyr Zelenskyy as the primary channel for collecting donations to the war effort.

“This event has one intended purpose, and that purpose is to raise awareness for UNITED24, the official charity of the Office of the President of Ukraine. Only UNITED24 has the capability and reach to provide aid and assistance to the wounded and hungry in the most dangerous parts of the country,” explains Max Lurya, founder of EnoughTea Foundation.

Despite the festival’s motivation being tied so closely to the ongoing invasion by Russian forces, Hrokholska notes how the films show an artistic side to the country beyond just a narrative of violence.

“In the programme we have not just movies about Ukraine and the war started by Russia. There are shorts about all the things that are vital to every human being: love, support, faith, family, motherland, friendship, culture, language and so much more,” she explains.

“The films contain a lot of Ukrainian context, of course. But there are values and views that don't need translation or explanation - every modern educated person will understand those messages and feel compassion for the main characters,” Hrokholska adds.

Giving some guidance through the selection of films, Hrokholska notes that “every short film is on the list for a reason”, and that these are all films with themes that deserved to be seen by Hollywood audiences.

Russians and Ukrainians are not the same people

“But, I’d say 'MOM!' by Bogdan Zhelezniak is the closest one to the current Ukrainian context and what every Ukrainian family is going through. The film was made this summer and shows an unbridgeable gulf that exists between these two countries,” she notes.

One of MOM!’s themes that strikes to the core of Putin’s unjustified aggression is that of Ukraine’s unique and separate national identity from its invader’s.

“Russians and Ukrainians are not the same people, and certainly not 'one nation' as Kremlin propaganda claims. The contrast of two characters is built on real phone conversations of Russian occupiers in Ukraine. This film will not leave anyone indifferent,” Hrokholska says.

At the London event, film industry representatives will see this year’s top upcoming talent from Ukraine. The event will also be broadcast live to Kyiv, as well as sending over some guest video messages from Hollywood in support of Ukraine.

The films shown at the festival will be as follows:

'You are my hero': Hollywood star Ben Stiller meets Zelenskyy in Kyiv