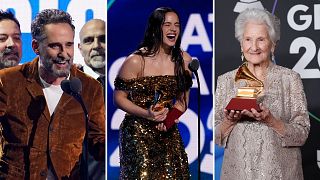 It was a star-studded night of surprises, historic wins and dazzling performances from some of the world's biggest artists.

Although Puerto Rican rapper Bad Bunny came out on top with the most Latin Grammy nominations (10), it was Uruguayan singer-songwriter Jorge Drexler who took home the most awards - six in total, including the Song of the Year award for "Tocarte".

The 58-year-old musician, who unexpectedly performed the song live with British singer Elvis Costello during the ceremony, dedicated his award “to all those who make urban music in Spanish.”

Bad Bunny, who was not present at the ceremony, still won five of the awards, claiming all the prizes in the urban music section, including Best Rap/Hip Hop Song for “De museo” and Best Urban Music Album for 'Un verano sin ti'.

Flamenco-pop superstar Rosalía won the coveted Album of the Year award for 'Motomami', becoming the first woman to win the prize twice - she previously claimed the award in 2019 for her sophomore album, 'El Mal Querer'.

Visibly surprised at winning the award, Rosalía said it was the album that she had to fight the most to make, but which has given her "the most joy.”

Rosalía thanked Latin America, Spain, her team and “the love of my life,” she said looking at the Puerto Rican artist, Rauw Alejandro, who was in the front row.

In an emotional moment, the young Mexican singer said the award for best new artist “was already ours” because most of the candidates this year were women and “even more so because I have here this wonderful woman who has brought tears to my eyes ever since I saw her.”

The "Grammy Granny" Álvarez took to the stage with a huge smile, accompanied by her grandson Carlos Álvarez, who produced her self-titled debut album.

If there was an award for most adorable artist, Álvarez would certainly have won.

Christina Aguilera joined Mexico’s Christian Nodal in a powerful interpretation of their ranchera song “Cuando me dé la gana” from her album 'Aguilera', which took the award for Best Traditional Pop Vocal Album.

After tying with Drexler for Best Pop Song, Colombian star Sebastián Yatra won the second Latin Grammy of his career for 'Dharma' in the category of Best Pop Vocal Album.

“I want to continue inviting composers, young people, all the people who make music to make the music that is always a reflection of their heart,” said Yatra.

Check out the video above to see all the highlights from the ceremony.

I listened to 7,500 independent artists for the Reddit Grammy Awards