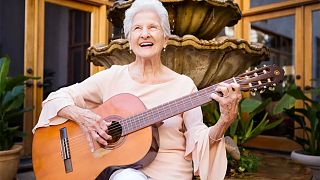 A Cuban-American woman has become a first-time Latin Grammy nominee at the tender age of 95.

Angela Alvarez began writing songs in 1930s Cuba when she was just 14, but due to a traditionalist father she kept her ambitions and talents hidden.

It wasn’t until decades later, settled in Baton Rouge, Louisiana, that Alvarez’s grandson Carlos Jose Alvarez asked her about the music that used to entertain the younger generations of her family.

In response she produced a book of 40 hand-penned songs that told the story of her tumultuous life.

Carlos Jose went on to become a composer himself. After years of delay, a friend asked him in 2016 if he was waiting for his grandmother "to die" before he did anything with her talent. Taking the words to heart, the musician flew Angela out to Los Angeles to record her life’s work with a host of GRAMMY-nominated artists.

Who is Angela Alvarez?

The music which has earned Alvarez her Latin Grammy nomination tells the story of a life affected by both personal tragedy and touched by world events.

In post-revolution Cuba, Alvarez was faced with the unimaginable decision that so many Cuban parents faced; whether to keep her family together in Cuba or flee communist oppression and send her children to safety in the United States.

After a heart wrenching decision at the border Alvarez chose the latter, eventually managing to join them. She had to leave her husband behind on the Caribbean island.

The story of this experience, as well as the later loss of her husband and daughter to cancer, is told in her music.

Alvarez’s story has also been made into a documentary, Miss Angela, produced by Andy Garcia and released in 2021.

The grandmother and nonagenarian will finally live out her dream of being a professional musician by performing at the Latin Grammys, where she is nominated in the Best New Artist category, later this week on 17 November.

The 23rd Annual Latin Grammy Awards will be held on Thursday 17 November at the Michelob Ultra Arena, Las Vegas.

Latin Grammys 2022: A night of historic wins and surprises