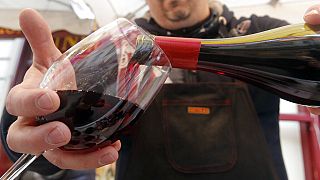 At just after midnight, the first bottle of this year's Beaujolais Nouveau was uncorked to much jubilation at Pied de Cochon brasserie in Paris.

The restaurant has become a well-known spot for celebrating the annual ritual.

It's traditional to open a bottle after the clock strikes twelve on the third Thursday of November.

"So far I like it. You can tell it's a younger wine," Miguel said. "It's not as deep as the other wines but I'm very surprised at how smooth it is, and not as acidic as newer wines are."

Catrina Debord is also visiting from the US and she said she enjoyed the experience of being present at the first opening of a bottle.

"It's something I've known about for years but to have it here, the absolute day it's released, is really exciting and it's wonderful this year," she said.

However, wine quantities are down because of bad weather.

"The quantity will be 20% lower than the average of the last five years."

"The quantity will be 20% lower than the average of the last five years," said Daniel Bulliat, president of Inter Beaujolais, who nevertheless praises a "pleasing quality" for this vintage.

About 48% of the Beaujolais Nouveau produced, 94% of which are Gamay reds, are exported, according to Inter Beaujolais' 2021 figures

Japan remains by far the main export market for the drink with 3.6 million bottles (41% of exports), followed by the US and the UK.

Check out the video above for footage of the celebrations.