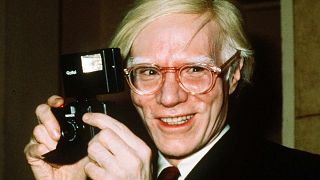 The self-portrait 'Nosepicker 1: Why Pick on Me' and 'Living Room' have never gone to market before and are expected to fetch a total of between €528,000 and €913,000 combined, a drop in the ocean compared to his portrait of Marilyn Monroe 'Shot Sage Blue Marilyn' which sold for €187 million in May.

Custodian of the pop artist’s works, Warhola, said that the paintings had been in the family for 70 years, but now is the time to sell them to “share the gains” between Warhol’s seven heirs.

Warhola said the expressionist paintings, which are different in style to the artist’s most famous prints, are “totally unique”.

Painted when Warhol was just 20 years old, his self-portrait sticking his finger in his nose conveys a youthful sense of experimentation and humour. It has been displayed several times, around the world, along with Warhol’s painting of his Pittsburgh living room.

Once, these works were almost lost when the family car was stolen with the paintings inside. In a twist of fate, the car was eventually found and the paintings were unharmed.

The pieces will be go on auction on tonight (Tuesday 15 November) in Phillips House in New York.