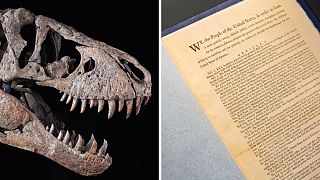 Have you been in the market lately for a fossilised skull of a Tyrannosaurus rex? Or perhaps an original copy of the US Constitution?

If so, then it would be worth checking out the "Luxury Week" launching at Sotheby's in New York, where some of the auction house's highest value luxury items are going under the hammer.

"We're just kicking off our Luxury Week here in New York, so that's sales of jewellery, watches, wine and spirits, we'll have cars, we'll have properties, the US Constitution, a dinosaur skull. This is a week where our luxury division exhibits all of our greatest things", says Quig Bruning, the senior vice president and head of jewellery at Sotheby's.

The crown jewel of its current collection is known as the Golden Canary diamond, which is estimated at an extraordinary €14 to €19 million ($15-20 million).

The 303 carat diamond has humble beginnings. Sotheby's says the diamond was found in the 1980s by a young girl who was playing in a pile of rubble the backyard of her uncle's house in the Democratic Republic of Congo.

It is believed that miners in the area had discarded the rock, believing it was too big to contain a diamond.

The Golden Canary diamond will be auctioned off among other high-value jewels at Sotheby's on 7 December.

Coming in at a more wearable size is the Long-Lost Emerald, another jewel being auctioned off at Sotheby's in the coming weeks.

Recovered from the 1622 shipwreck of the Nuestra Señora de Atocha, the emerald was discovered by a team funded by poultry magnate Frank Perdue 37 years ago.

Perdue gave it to his wife as an engagement ring. Now, years later, she is auctioning it to donate the proceeds to support humanitarian relief efforts in Ukraine.

Other standout items on sale

At least as rare, and certainly more fragile, is an original copy of the US Constitution that will soon hit the auction block.

The print is one of only 13 copies known to exist, and one of only two in private hands. It was last seen at auction in Philadelphia in 1894.

Last year, the other privately-held copy sold at a Sotheby's auction for $42.2 million (approx. €40 million).

It goes up for auction on December 13th.

Perhaps the oldest object of them all is the rare fossilized skull of a Tyrannosaurus rex - which auctioneers says is the most complete example ever discovered by archaeologists.

You can bid for any of these items on the Sotheby's website.

Check out the video above for a closer look at the luxury items going on sale at Sotheby's.