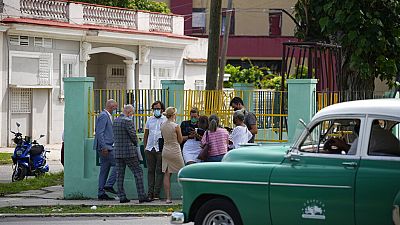 Diplomats from several countries wait outside the court building where a trial is going on for Cuban artists Luis Manuel Otero Alcantara and Maykel Castillo in Havana, Cuba, M   -   Copyright  Ramon Espinosa/AP
By Lauren Bain  with AP  •  Updated: 31/05/2022

Two Cuban artists went on trial on Monday after being detained for nearly a year for inciting protests and criticising the government.

Prosecutors are seeking 10 years prison time for rapper Maykel Castillo and seven years for visual artist Luis Manuel Otero Alcántara, both of whom have been declared prisoners of conscience by Amnesty International.

Both artists were involved in a group called the San Isidro Movement, which is composed of Cuban artists, journalists, and intellectuals who are vocal in their criticism of the Communist government.

Castillo, also known by his stage name Osorbo, won a Latin Grammy for his song “Patria y Vida” – “Fatherland and Life” following his arrest in May 2021. The song is a play on the country’s slogan “Fatherland or Death.”

Otero Alcántara, known for using the Cuban flag in his work, is being accused of defamation and abusing national symbols.

Both men were detained before widespread anti-government demonstrations spread across the country in July 2021, protesting food shortages and power outages.

Otero Alcántara had a previous run-in with police in November 2020, when authorities broke up a sit-in he was hosting in support of rapper Denis Solís, who was being detained for insulting an officer.

Officials claimed that they were enforcing COVID-19 health regulations, triggering an even larger gathering of 200 people at the Culture of Ministry, which was broken up after protesters hailed a victory – a government promise of more tolerance and free speech.

Since Otero Alcántara’s arrest, a number of other artists have shown support by demanding their works be removed from the National Museum of Fine Arts. Their requests have so far been rejected.

Amnesty International has urged Cuban authorities to allow international organisations access to observe the trial and release the men.

Diplomats representing several European countries waited outside the court building on Monday, but were denied entry.

Long queues for petrol in Cuba

Cuba to authorise and regulate the use of cryptos for payments