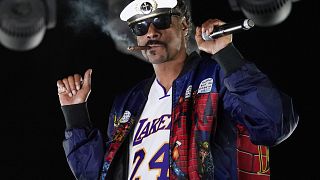 Rapper Snoop Dogg is getting his very own biopic   -   Copyright  Chris Pizzello/Invision
By David Mouriquand  with AP  •  Updated: 10/11/2022

You don’t have to be dead and buried to get your very own biopic these days.

Whether it’s The Social Network chronicling the beginnings of Mark Zuckerberg’s Facebook days, The Fifth Estate about Julian Assange, the biographical treatment of Tonya Harding’s notorious skating antics in Craig Gillespie’s I, Tonya or the Elton John chronicle Rocketman, this genre has been all the Hollywood rage for a while now.

They are proven awards bait and generate significant buzz at the box office, with audiences flocking to the newest celebration of stars and cultural icons.

And speaking of buzz, the latest to get his very own big-screen biopic is none other than rapper Snoop Dogg – who reportedly, according to recent interviews with his ex-Personal Blunt Roller (yes, that’s a job), smokes as many as 150 joints a day.

That’s a lot of devil’s cabbage... even if the claims have been disputed.

But back to cinema…

Universal Pictures announced that the studio is developing a film about Snoop Dogg’s life to be produced by the 51-year-old rapper, who broke through in the early ‘90s as part of the West Coast rap scene as a collaborator of Dr. Dre’s.

The film will be written by Joe Robert Cole, who co-wrote Black Panther and Black Panther: Wakanda Forever, and directed by Allen Hughes, the filmmaker of Menace II Society and The Book of Eli.

Hughes is also familiar with the hip-hop biopic following his work on the HBO docuseries The Defiant Ones, which follows the rise of Dre and music executive Jimmy Iovine.

The main man has stated that he’s thrilled with the choice of director.

“I waited a long time to put this project together because I wanted to choose the right director, the perfect writer, and the greatest movie company I could partner with that could understand the legacy that I’m trying to portray on screen, and the memory I’m trying to leave behind,” Snoop said in a statement. “It was the perfect marriage. It was holy matrimony, not holy macaroni.”

He’ll produce the film along with Sara Ramaker and Hughes.

Cole said the studio “has proven they can guide a movie like this to something special.”

“Snoop Dogg’s life and legacy make him one of the most exciting and influential icons in popular culture,” said Langley. “We met with Snoop shortly after he acquired Death Row Records and had the opportunity to hear his story in his own words. We are humbled to be able to create the lasting document of this singular artist.”

The biopic marks the first film from Snoop’s Death Row Pictures and will incorporate music from his catalog.

We can only hope that ‘The Doggfather’ is in strong contention for the title.

Michael Jackson biopic to be made by producer of 'Bohemian Rhapsody'