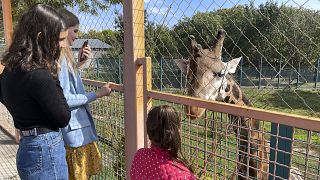 On a sunny autumn day in southern Ukraine, Mykolaiv zoo feels so peaceful as if the visitors could almost leave the months' long war behind its gates.

There is an exposition of rocket debris that has fallen here early on in the conflict, and the sounds of distant explosions bring us back to the sad reality. Here people are not far from the southern front line of Russia’s war against Ukraine.

Mykolaiv's people and infrastructure have been constantly attacked by Russian rockets and drones. But life in the zoo, one of the oldest in Ukraine, carries on.

To keep the animals healthy under war-time constraints, the park’s staff have had to innovate. A new source of fresh water was needed for the animals, as well as ensuring food and medical supplies, despite severe logistical issues.

The zoo is still open today thanks to the help of volunteers, the support of other zoos from abroad and donations. People from different parts of the world have also been buying online tickets to support it.

Nadia and Oleg were buying their tickets to visit back in spring, during the earlier stages of the Russian invasion, while the animal park was still closed. The place means a lot to the couple. They went there on their first date and now they are visiting it with their young daughter.

The zoo remains one of the very few places open for education and leisure for the residents of Mykolaiv. Kindergartens, libraries, cinemas, shopping malls - almost everything else remains closed because of the fighting.

“This is a wonderful place where we can get distracted from the war, relax, spend time with my child, entertain her, get her interested in things and teach my daughter something,” says Tetiana, another visitor.

The Zoo has also offered shelter to the pets that Ukrainians had to leave behind during evacuations. Parrots, guinea pigs, chinchillas, ferrets among others are currently homed here. But nobody knows for certain how many more animals will need to be housed here, nor how long they will have to stay.

You can watch Euronews' full report above.

Nine new developments to know about Russia's war in Ukraine