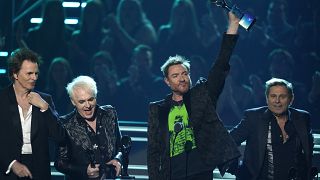 Duran Duran's original guitarist Andy Taylor was absent for the band's induction into the 2022 Rock & Roll Hall of Fame at the Microsoft Theatre in Los Angeles this weekend.

The 37th annual induction ceremony was set to be the first time the British new wave group, whose hits include ‘Hungry Like A Wolf’, ‘Rio’ and Bond theme ‘A View To A Kill’, had played together in 17 years.

The band were the first act inducted during Saturday's ceremony and took the stage by performing their 1981 breakthrough hit ‘Girls On Film.’

The shrieking crowd was there for it, but the music wasn't. The band was all but inaudible other than singer Simon Le Bon, whose vocals were essentially a cappella.

After their set, the band read a letter from the musician explaining why he was unable to attend the ceremony, saying that Taylor, 61, was currently in treatment for stage 4 metastatic prostate cancer.

"Just over four years ago I was diagnosed with stage 4 metastatic prostate cancer. Many families have experienced the slow burn of this disease and of course we are no different; so I speak from the perspective of a family man but with profound humility to the band, the greatest fans a group could have and this exceptional accolade.”

Taylor’s letter went on to say that although his current condition is "not immediately life-threatening, there is no cure."

Taylor added that he was "truly sorry and massively disappointed" he could not attend the ceremony, but that he was "very proud of these four brothers" and "overjoyed" they were accepting this award.

In his acceptance speech, Richie lashed out at those during his career who accused him of straying too far from his Black roots.

“Rock ‘n’ roll is not a color,” he said. “It is a feeling. It is a vibe. And if we let that vibe come through, this room will grow and grow and grow.”

As for Eminem, he opened with 1999's ‘My Name Is,’ before bringing on Aerosmith’s Steven Tyler to sing the chorus of ‘Dream On’ for 2003's ‘Sing for the Moment,’ which samples the Aerosmith classic.

Not content with leaving it there, he then brought on Ed Sheeran to sing his part on the 2017 Eminem jam ‘River’ as rain fell on the stage.

“I'm probably not supposed to actually be here tonight for a couple of reasons,” Eminem, wearing a black hoodie, said as he accepted the honor. “One, I know, is that I’m a rapper and this is the Rock & Roll Hall of Fame.”

He's only the 10th hip-hop artist among well over 300 members of the Hall of Fame. He was inducted by his producer and mentor Dr. Dre, whom he credited with saving his life.

And then there was the wonder that is Dolly Parton.

When the nominees were announced in May, Parton “respectfully” declined, saying it didn't seem suitable for her to take a spot as a country-to-the-core artist. She was convinced otherwise, and ended up the headliner Saturday night.

“I’m a rock star now!” she shouted as she accepted the honor. "This is a very, very, very special night."

She closed the night leading an all-star jam of her fellow inductees on her country classic “Jolene.” Le Bon, Benatar and even Judas Priest singer Rob Halford took a verse.

“We got a star-studded stage up here,” Parton said. “I feel like a hillbilly in the city.”

Dolly Parton sings COVID-themed 'Jolene' version as she gets vaccine