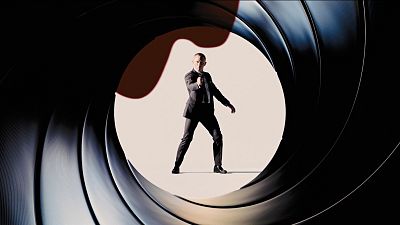 The world’s most famous spy is now technically eligible for an OAP card.

Indeed, James Bond turns 60 today, as the release of the first Bond film, Dr No, hit the screens on 5 October 1962. This also marks six decades of Bond original theme songs, with each film’s signature tune proving to be an endearing part of 007’s cultural legacy.

Indeed, the songs are the secret ingredient of the franchise. When paired with stylish credits, they set the tone for the action to come, reflect the current era of the beloved film series - and a Bond tune represents a spot in music history for any musician.

They’re not all keepers, as the quality does vary from kill-it-with-fire (apologies to Madonna), ear-bleedingly annoying (Sam Smith) to the absolute stone-cold classic (Shirley Bassey, we bow to you and your three Bond songs).

So, to celebrate the big 6-0, we’ve polled Euronews HQ to find out which Bond songs rank among our journalists’ favourites. You may be surprised by some of the answers…

I can’t remember anything about The Spy Who Loved Me except its opening scene. Maybe that’s because I’m not a real James Bond fan, or maybe it’s just that good. Roger Moore skis off the edge of a cliff and he’s just falling, falling, falling. For a moment you think, “Wait — is 007 really about to die?” Then he pulls the ripcord on a Union Jack parachute; close-up on Moore’s face (absolutely knackered). Finally, the tumbling notes to Carly Simon’s ‘Nobody Does It Better’ as a montage of acrobatic naked women begins. It’s so silly yet breathtaking at the same time, with Simon’s song settling all that prior suspense and somehow sending shivers down your spine — despite Moore’s silhouette jumping on a trampoline in the background. When it comes to Bond songs, nobody’s done it better.

Pick for next Bond theme: I think it needs to be more upbeat and soulful than the previous few. I'd love it if they brought back one of the classics like Tom Jones and went full on eccentric 60s vibes.

'A View To A Kill' by Duran Duran, from the 1985 film of the same name, has to be my favourite of all the James Bond theme songs. It’s encapsulates the electro pop of the 80s that Duran Duran did so well (need we remind you of 'Hungry Like the Wolf' and 'Rio'?) whilst still feeling quite Bond-esque. They’ve managed to blend the classic Bond dramatic motifs with the guitars and the synths to produce a track that is truly of its time. Though the verses might feel smooth and mysterious, leading to a big chorus like every other Bond title track, this song is unlike anything that would be released today. There’s a catchy chorus and a real pop feel which makes it much more fun than the moody ballads of the 2010s. How many other Bond songs could you say you’d happily dance to if it came on in a bar? 'A View To A Kill' is a Bond theme very much of its time and I love it.

Pick for next Bond theme: Lady Gaga – if we’ve learned anything from A Star Is Born, is that there isn’t much she can’t do.

Pick For the next Bond theme: I recently saw Ellie Goulding performing for the tribute to Roger Federer and she would be an ideal choice for the next theme.

It was a toss-up between Tina Turner’s 'Goldeneye' and Chris Cornell’s 'You Know My Name', but I ride for the underdog. Dr No may turn 60 this year, but one overlooked Bond adventure celebrates its 35th anniversary this year, and it’s hands down one of the series’ greatest: Timothy Dalton’s debut in the tux in 1987’s The Living Daylights. If the Daniel Craig tenure managed to update Bond and distance it from an overreliance on CGI following the pants-down spanking the Jason Bourne series gave the tail end of the Pierce Brosnan era, Dalton did it first. He laid the groundwork for a more gritty, ruthless iteration of the character. As for the song, it is far from gritty but an absolute tune. ‘The Living Daylights’ was the last song co-written by John Barry for the series, and performed by Norwegian pop outfit A-ha. The orchestral arrangement is terrific and the product-of-its-time 80s-flavoured electro flourishes can’t help complement the irresistible hook. Not only is it a perfect companion song to Duran Duran’s ‘A View To A Kill’, but also one of the most underappreciated theme tunes in the canon.

Pick for next Bond theme: Karen O / The Yeah Yeah Yeahs could add the rock flavour that Paul McCartney and Chris Cornell did for Live and Let Die and Casino Royale.

I am not a big Bond fan - I stopped watching the films many moons ago (although I did watch a couple of Daniel Craig's efforts including No Time to Die). But the songs - now that is a different matter. I like a lot of them but, much like with the films, my knowledge runs out with 'A View to a Kill'. Picking a favourite is difficult as 'Goldfinger', 'Diamonds are Forever' and 'Nobody Does It Better' are all belters. But I am a sucker for a ballad so I'll plump for Matt Monroe's 'From Russia with Love'. Even if younger colleagues in the office have never even heard of it - the first Bond theme song of them all is the daddy. Playing out at the end of the film, Matt Monro's haunting voice sets the bar for all future theme songs to follow. Give me a better lyric than: "Still my tongue-tied, young pride would not let my love for you show, in case you'd say no." I'll wait.

Pick for next Bond theme: If it’s going to be a big relaunch, bring back Shirley Bassey.

It behooves any British icon to eventually lean on another British icon. The result is British iconography squared, and just like when the Queen met Paddington, people go wild for it. It’s fitting then that for the absolute best Bond theme tune, the series enlisted a Beatle. Paul McCartney doing a Bond song is such an obvious choice, you’d worry it would come across as trite. Instead, it encapsulates everything joyous about the series. It is in turns bombastic with its explosive chorus, while containing that certain classical composure of the character through a sonorous piano melody in the verse. Importantly, like the other best Bond song ‘Diamonds are Forever’, the chorus and most memorable line is the name of the film. ‘Live and Let Die’ as a title came from Ian Fleming, but the way McCartney shouts it, it feels like a classic Beatlism. He turns a rote phrase intriguing, just like ‘Eight Days a Week’. As Bond finally said goodbye to Sean Connery and ushered in its second major era with Roger Moore, it needed a confident rallying cry. Nothing could do it better than ‘Live and Let Die’.

If I think of an iconic Bond song, ‘Skyfall’ immediately springs to my mind. In my opinion, the song is actually much more outstanding than the movie itself (sorry, not sorry). The deep and powerful pitch from Adele fits perfectly with the darker twist of the 007 adventures. 77 musicians were reportedly required to give the music its orchestral background - an effort that proved worthwhile considering ‘Skyfall’ won the Oscar for best song.

Pick for next Bond theme: French artist Woodkid. His music was used in Assassin's Creed soundtrack, so he can create an epic soundtrack.