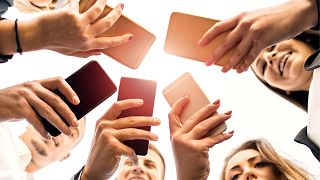 Social media has been feeling like a chore for a lot of us these days.

As targeted ads hound us constantly on the internet, CEOs post cringe-worthy updates on LinkedIn and filters Facetune us into oblivion, online communities have become a bit of a drag.

Let's be honest: Facebook is almost exclusively used by people you went to high school with and family members you hardly talk to. Instagram and Tiktok are places for doomscrolling through videos of people you’ve never met, and Twitter is now Elon Musk’s dumpster fire.

In this social media wasteland, BeReal has emerged as a potential beacon of hope.

The French app markets itself as the “simplest photo sharing app” that lets you connect candidly with your friends, #nofilter.

Each day, the app sends users a notification at a random time. You have two minutes to take a photo of whatever you happen to be doing, using the front and back cameras of your phone simultaneously.

The app allows users to post after the specified 2-minute window, but you can’t see any of your friends’ posts until you’ve posted yourself, and your friends will be notified if you post late.

The idea is that you have to share a glimpse into your real life. And it’s a pitch that’s proven wildly successful over the past year.

As of October, the BeReal app has been downloaded 53 million times - compared to just over 7 million in April. The app counts 10 million daily users.

BeReal has especially struck a chord with younger users, becoming a favourite with Gen Z early on.

“Nothing stressful about it”

Kylie Goodrich started using BeReal back in April, but she says she only began using it every day when she got to Milan this fall for her semester abroad.

The 21-year-old is a student at Purdue University in the United States. She told Euronews Culture she uses BeReal to keep in touch with friends but also to keep track of what she’s been up to.

“My favourite thing about BeReal is that it’s basically a snapshot of your day, so I can always look back and see what I was doing. To me it’s like a digital diary,” she said. “I feel like everyone is their true self on BeReal and there’s nothing stressful about it.”

“It’s fun to see people doing mundane things and the occasional crazy BeReal of someone, like, cliff diving,” she said. “I love using BeReal while studying abroad because it’s a very unique documentation of my experience.”

The app is also gaining traction with millennials, though many of them don’t like to admit they’re on it.

One Euronews colleague I spoke to on background for this piece said that a lot of people cheat on the app, taking their photo late so their posts are more interesting.

“Last night my BeReal notification came in at like 11 pm and I was having a rough day, so I decided I would just post tomorrow,” she said. “That’s one of the downsides of the app, it’s not always real.”

No ads or data collection

The app’s terms of use prohibit users from using it “for advertising or commercial purposes” or to “collect information, data or Content about other Users without their permission.”

BeReal’s founders, Alexis Barreyat and Kevin Perreau, have kept a low profile and have not given many hints about any future monetisation of the app.

But the Financial Times reported that BeReal is considering subscriptions or paid features, as opposed to flooding users with ads like its competitors.

When contacted by Euronews Culture, a company representative said BeReal was not doing interviews at the moment.

If the company’s origin story is anything to go by, BeReal will try hard to avoid turning the app into another ad factory.

It states that BeReal “is a place where real life is captured, free from the need to create, cultivate and amass influence.”

For its many users, that comes as a welcome relief.

A quiet place on social media

Sophie Bennett, a marketing professional in Toronto, told Euronews Culture that BeReal is “the only social media platform that feels like a natural way to connect with my friends.”

Bennett, 33, has been using the app for around 3 months and says she posts pretty much daily.

Having worked in content creation on social media, she says many platforms feel very curated and tied to business.

Comparatively, BeReal cuts through all that noise.

“You know when you get the mindless scroll on any other app? You don’t get that with BeReal,” she said. “My group of people I’m following is still quite small, so I’ll be on it for all of 10 minutes at the very most.”

While users can comment or react to each other’s posts, there’s no function to see previous days’ posts, which limits the amount of time users can spend on the app.

“There’s not a lot to digest, so for the most part you’re in and out which is actually really lovely,” Bennett said.

Instagram takes a ‘big step back’ after user backlash