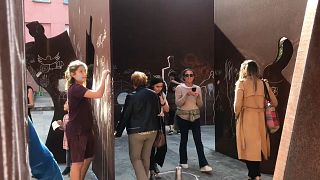 From Strasbourg to San Sebastian to south London - this week's Rendezvous cross the continent to bring you a small but carefully considered selection of some of the best arts on display in Europe this week.

Works recovered in Germany in 1945

Still lives, portraits and nude paintings are part of an exhibition which brings together 27 artworks looted by Nazi Germany and repatriated at the end of WWII. It was hoped the artworks would one day be returned to their rightful owners or their descendants.

The paintings were intended by Adolf Hitler to be part of a giant museum he wanted to build in Linz near his hometown, as well as forming part of Goering's personal collection.

San Sebastián in the Basque Country has found a way of making contemporary art more accessible to the general public. BAI has produced what it is hoped will become an annual exhibition of Public Art in the city's public spaces.

Each year, BAI invites four contemporary artists to reinterpret sculpture on the streets of Donostia, the Basque name for San Sebastián

Infinity Mirrored Room - Filled with the Brilliance of Life is one of Kusama’s largest installations to date and was made for her 2012 retrospective at Tate Modern. It is shown alongside Chandelier of Grief, a room which creates the illusion of a boundless universe of rotating crystal chandeliers.

A small presentation of photographs and moving image – some on display for the first time – provides historical context for the global phenomenon that Kusama’s mirrored rooms have become today.

Rendez-vous: the best of art and culture in Europe