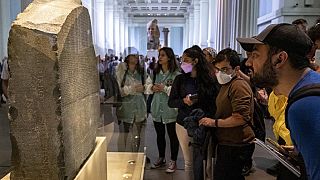 The Rosetta Stone is the star attraction of a new exhibition at the British Museum. It marks one of the most significant dates in Egyptology: 200 years since the French scholar, Jean-Francois Champollion, finally cracked its code and deciphered hieroglyphs.

The exhibition comes at a time when the British Museum is under pressure from some Egyptologists to hand the Stone back to Cairo. Currently, various UK institutions have procedures or consultations about returning other artefacts looted during the colonial era.

The Human Rights Film Festival Berlin is returning for the fifth time to the German capital's cinema screens. And this year’s theme is ‘Beyond Red Lines’.

The festival is taking a stand on human rights, children's rights, climate protection and peace in times of war.

The programme is broadcast across eight theatres and a selection will be streamed nationwide.

Many of the directors are there in person for discussions with the audience after screenings.

A voyage through life and death

French artist, Fabienne Verdier, has joined forces with the Musée Unterlinden to present her latest exhibition. The artist's creations depict the end of life and compare that to the stars in a journey which embraces both death and transfiguration.

Her spectacular installation Rainbows is the conclusion of this journey.