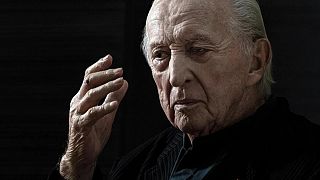 A national tribute will be held on Wednesday to mark the death of French painter Pierre Soulages, who died last Wednesday at the age of 102.

The ceremony, organised by the Élysée Palace, will take place in the Cour Carrée of the Louvre for the artist from Rodez in south-western France.

It will be open to the public and will be chaired by President Emmanuel Macron in the company of the artist's family.

He will be buried in Paris on Friday 4 November at the stroke of 2 pm and at the same time a mass will be held at the Sainte-Foy de Conques abbey in Aveyron.

The ceremony follows a request from Collette, his wife of 80 years as Soulages was instrumental to the abbey's 104 stained glass windows.

At its inauguration in 1994, Soulages, the master of black, sparked controversy by unveiling stained glass windows that were  translucent and colourless. But not long after, they were recognised and celebrated for how they "captured" daylight and bathed the abbey church in natural clarity with variations in tones, from blue to gray, according to the hours and seasons.

Soulages earned his soubriquet as he rose to fame with his canvases reflecting the different uses of the colour black. For him there was only one colour: black. He spent a lifetime exploring the light within it.

"I love the authority of black, its severity, its obviousness, its radicalism," the painter who was himself always clad in black, declared.

"It's a very active colour. It lights up when you put it next to a dark colour," he told AFP in an interview in February 2019.

Works by the best-selling French artist have commanded seven-figure sums, with a 1960 canvas of thick black stripes selling at auction at the Louvre for $10.5 million (approx. €10.4 million).

A household name in France but less known internationally, his paintings hung in more than 110 museums around the world, including the Guggenheim in New York and London's Tate Gallery, with hundreds more housed in the Musee Soulages, which opened in 2014..

For his 100th birthday in December 2019, he was treated with a retrospective at the Louvre - a rare honour for a living artist.

Soulages titled all his pieces "Peinture" ("Painting"), distinguishing them afterwards by their size and date of production.

When he was around 60, he shifted from black to the reflection of light from black - a technique he called "outrenoir" ("beyond black"). It involved scraping, digging and etching thick layers of paint with rubber, spoons or tiny rakes to create different textures that absorb or reject light, taking him to what he called a "different country" from plain black.

Hollywood celebrities including Alfred Hitchcock reportedly snapped up his works.

A perfectionist through and through

With all his "black marks on paper", his mother would tease him that he "was already mourning her death", he said in the AFP interview.

He was admitted to the Paris Beaux-Arts school just before the outbreak of the Second World War. He showed his first works in 1947.

While contemporaries and friends, such as Hans Hartung and Francis Picabia, were dabbling in colour, he opted for the walnut stain used on furniture to create geometric works on paper or canvas. For a while he even tried daubings of dark tar on glass.

Soulages was also known for perfectionism: if he was not 100 percent happy with a painting, "I burn the canvas outside. If it is mediocre, it goes."

Searching for the Eternal: Celebrating the art of painting on stone

Does art made by an AI have aesthetic worth?