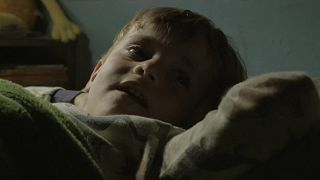 The sixth short in our countdown is Tuck Me In, by Ignacio F. Rodó.

Who’s under the bed?

Winner of the 2014 Filminute Award, Ignacio F. Rodó’s Tuck Me In is the shortest short in our series.

Its simple premise is an invigorating reminder that the best horror films can transform the mundane into something altogether more sinister. Here, an everyday parental moment – tucking a child in for bedtime – is leveraged for maximum creepiness, all in just under a minute.

From Invasion Of The Body Snatchers to Jordan Peele’s Us, there’s a treasured doppelgänger tradition in horror, and Tuck Me In falls neatly into that category. While it doesn’t reinvent the wheel, it distils the subgenre to its terrifying essence. That’s on top of being an effective testament to what can be accomplished in a minute flat, as well as further proof that you don’t need to resort to cheap jump scares in order to deliver an effective fright.

Join us tomorrow for our penultimate horror short in our Halloween series...