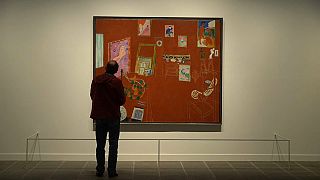 In 1911, one of France’s most famous artist Henri Matisse sat down to paint his studio.

It is now considered a "landmark" in European Modernist painting. It is one of the most prized works at New York's Museum of Modern Art (MOMA).

However, the works depicted in the painting have since been sold and scattered around the world, some in private collections.

The locations of a couple of the lesser-known works were only recently discovered.

Denmark's national gallery, the Statens Museum for Kunst, has since collaborated with MOMA to reunite the works for the first time.

The Danish museum owns 25 of Matisse's paintings and some of his sculptures. Its collection is one of the most important outside of France.

"Matisse is one of the greats, and this picture is one of his greatest paintings. And it has so much to do with the fact that he painted his studio, the pictures and the sculptures he had made at that moment,” said Ann Temkin, chief curator of painting and sculpture of MoMA.

“And in a way, you could say it's a self-portrait because for an artist, what they make is who they are."

"You'll never see these together again, I don't think that there will be a chance. I can't imagine in the future where this would happen," Temkin added.

'Objects of Desire': How did Surrealism influence design?