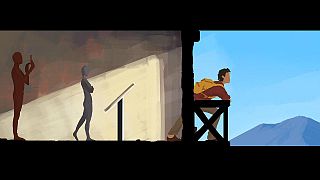 A video game based on the collection of an Italian museum is proving a big hit.

‘Father and Son’ is the first video game produced by a museum.

Thought to be the first of its kind, gamers and visitors to the National Archaeological Museum of Naples (MANN), Italy, can take a digital trip back in time.

Players of ‘**Father and Son**’ help a character, Michael, find the father he never met, navigating important historical events - from the volcanic eruption at Pompeii, the Bourbon age, to finally modern-day Naples. The personal quest becomes a universal timeless adventure.

The game is intended as a new way of storytelling, weaving the main character's story with the museum's collections. Players make choices along the way which affect the result of the game.

It was MANN's director, Paolo Giulierini, who came up with the idea. He wants to open the museum up to new art forms.

"So, it is no longer a museum seen through the perspective of classical painting, sculpture and architecture, but also all those art forms that are considered innovative and can attract larger and larger audiences," he explains.

To create the game, the museum got in touch with game designer Fabio Viola, who didn't take their enquiry seriously at first.

"I thought it was a joke, because until then, as I originally work with video games, I had never worked with cultural institutions," he says.

"This collaboration was kind of suspicious, because video games are usually seen as a hobby, something frivolous and recreational, while museums are usually an emblem of what is serious in life."

Viola has designed the game where Michael moves through different ages and takes hints from artworks that are part of the MANN collections to travel through time.

And what players see in the game is deliberately not a carbon copy of everything that's in the real-life museum.

"We have to imagine a video game that, even if it was paid and commissioned by a cultural institution, is not an obsequious repetition of what is inside the museum, because during the whole game we meet only three artworks that serve as triggers for the time travel part," says Viola.

The game has already hit over 5 million downloads.

As an added bonus, those who play it while inside the actual museum get to unlock extra content via geo-location.

"I think it's a really interesting way to experience the museum, I think is quite unique, I've never seen anything quite like it," says Dan, a tourist from London, England.

"I like the way that you can interact with the environment and you can go back in time to different periods, like when it was first opened or when the artefacts were first made, which I think is extraordinary really."

"You choose the timeline that you are changing, is really good that you can see what it was and what it is right now."

And what do we learn through the time hopping quest? That grudges are not worth holding onto, especially because a time will come when only memories will remain - even if loved ones often don’t.