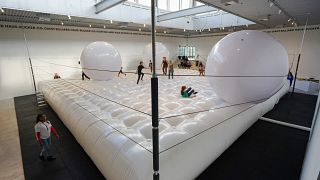 An installation titled 'Giant Billiard', which recently opened at Denmark's Arken Museum, invites visitors to bounce around in an experimental game of human billiards.

The project was originally created in the 1970s by the rebellious art collective Haus-Rucker-Co, who wanted to question the often-limiting general perceptions of space and build new utopian urban spaces.

"The intention was to break the historic heritage character of the museum and to put some more life in and to bring a new kind of activity into the museum style," says Günter Zamp Kelp, an architect and co-founder of the Haus-Rucker-Co collective.

The utopia of play

'Giant Billiard' consists of three large inflatable balls on a bouncy castle-like mattress, where visitors of all ages can run, jump and stumble around in an anarchic explosion of energy rarely seen in a museum setting.

Amongst the laughs and gasps, participants inadvertently become part of the billiard game, as they fight against or alongside each other depending how the giant inflatable balls fall.

"Normally when we're in a museum, we are told not to touch, to be quiet, to move in a slow pace. And here, we are letting loose. And there's something lovely and transgressive about that," explains Arken Museum curator, Jenny Lund.

Lund also hopes that aside from having lots of fun, visitors will also takeaway some of the social commentary and meaning behind the installation.

"This is about architectural vision and utopian ideas. So hopefully, you will walk away thinking that sometimes unconventional solutions are needed," she says.

Visitor Frederik Svanholm has his own unique interpretation.

"If you're just lying down, then you are safe, right? As soon as you stand up in life, then the danger comes and knocks you out sometimes. That's what it tells me," he shares.

'Giant Billiard' will be on display at the Arken Museum of Modern Art from 8 October to 16 April 2023.

Check out the video above for a preview of the installation.