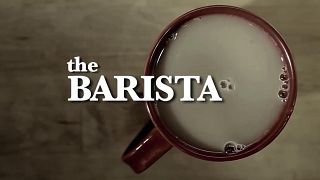 Euronews Culture are celebrating Halloween not only with a series on the mythical creatures of Europe but by counting down the days til that scariest of holidays with a horror short film every day.

Our second short of the week is The Barista, by Rebekah McKendry.

For Whom The Bean Tolls

Horror and comedy make wonderful bedfellows and are intricately linked.

They may seem like opposing genres, but fear and laughter are primal feelings and their execution on screen requires many of the same tools, including the necessity of a decent build-up and some pitch-perfect timing. The reactions both genres provoke are not too dissimilar either, especially when it comes to what Dr. Julia Wilkins calls “relief theory”.

Many horror films inject moments of comedy, bypassing unintentional laughs or laughter as a defense mechanism in order to go straight for the giggles.

The Barista is further proof that the two genres are a wonderful match made in hell.

This 2013 short from Rebekah McKendry is a deceptively ingenious and brew-ti-fully executed ride.

A lot of the humour hinges on the wired performance from Morgan Peter Brown, who plays a paranoid customer who confidently strides into his favourite coffee shop with a documented theory about who Dan the barista truly is.

Tension is built. Tension is released. And whether that catharsis is a scream or a laugh, chances are you’re going to feel good about it.