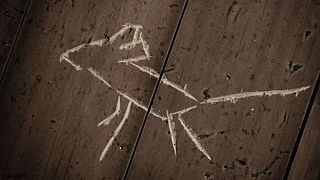 We here at Euronews Culture are celebrating Halloween not only with a series on the mythical creatures of Europe but by counting down the days til that scariest of holidays with a horror short film every day.

Think of this as a shorter, creepier advent calendar that gets you into the ghoulish mood by celebrating some of the most inventive, exciting and underseen artforms out there.

So, dim the lights and kick back with a pillow that you can clutch in quaking terror.

Our first short of the week is Feeder, by Christian Rivers.

How much would you sacrifice for inspiration?

We’ve all been there. Staring at the blank page and failing to type or scribble anything worthwhile. Agonizing over a white canvas begging for a splash of colour but you can’t begin to pick a tube of paint. Staring at six strings and not knowing where to begin strumming…

Creatives of all walks have it hard and creative blocks aren’t easy.

Kiwi director Christian Rivers - who’s served as the visual effects supervisor and storyboarded all of Peter Jackson’s films from Braindead to his The Lord of the Rings and The Hobbit trilogies - knows this.

His 2015 short film Feeder sees a down-on-his-luck musician having to weigh up which lines he’s willing to cross when an unseen entity trades him songwriting inspiration for an increasingly heavy price.

It’s a lean, mean and brilliantly evocative spin on the age-old Faustian myth about blues musician Robert Johnson selling his soul to the devil at a crossroads in order to achieve musical mastery.

Rivers crafts a twisted, Twilight Zone-riffing gem about the sacrifices one takes for the sake of artistic expression. It more than delivers on its premise and boasts a devilish twist ending that’ll make you think twice when it comes to nourishing your inspiration.

Just don’t get any ideas...

Stay tuned to our continuing countdown to Halloween with another mythical creature and short film tomorrow...