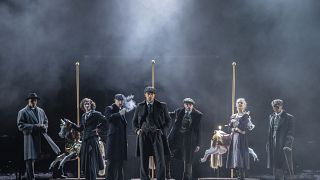 A trench descends around the stage as explosive percussion fills the room. In seconds, chaos engulfs everything as bodies fly. The bodies belong to the Rambert Dance company and we are in the midst of the First World War.

Starting years before the beginning of the eponymous TV series, ‘Peaky Blinders: The Redemption of Thomas Shelby’ is a startling dance adaptation of the show.

Currently playing at the Troubadour Theatre in Wembley, London, the show is in its first weeks of a nationwide tour that will bring a satisfying evening to fans and newbies of the show alike.

The show, written by series showrunner Steven Knight follows the first years of the Shelby gang as they return warworn from Flanders, and the establishment of the Peaky Blinders gang in Birmingham.

Accompanied by narration from the show’s own Benjamin Zephaniah, the thrust of the narrative is told through an evocative soundtrack and the writhing elastic bodies of the dancers.

Roman GianArthur’s soundtrack is urgently propulsive. It fizzes with its references to the anachronistic rock stylings of the TV series’ music choices, and makes sharp use of covers from Radiohead and Black Rebel Motorcycle Club. When the iconic theme tune ‘Red Right Hand’ by Nick Cave and the Bad Seeds is played by the live band, it’s undeniable how well GianArthur’s original tunes have captured the soul of the Peaky Blinders.

But the beating heart of the performance is the choreography and direction, from Rambert Dance artistic director, Benoit Swan Pouffer.

From the initial moments in the trenches, the action shifts to a Birmingham factory with chains and effervescent sparks littering the stage. It transforms continuously through depraved clubs and opium dens.

It’s in the latter, that the capability of dance to communicate something abstract beyond straightforward drama, comes into its own. The second half of the show kicks off with Tommy Shelby suffering from grief and turning to opium.

The staging of his turmoil is wonderful. As ‘Climbing Up the Walls’ by Radiohead plays ominously, cadavers on mortuary tables breathe smoke through their coverings. These opium zombies rise and sway, using the Michael Jackson leaning trick to create one of the most atmospheric moments of the show.

At the core of the Peaky Blinders universe is the moral depravity of the Shelby family’s acts bearing down on their souls. Pouffer’s choreography contorts Guillaume Quéau in a visual representation of his rotted being.

Throughout the show, dancers spin, jump and fling themselves communicating the disarray and moral abandon of an industrial Birmingham. Sometimes, there’s so much happening on stage it’s hard to keep up. But for the most part, the cacophony of bodies is there to amplify the emotion, and through clever lighting and excellent staging the intricate story is engaging throughout.

The whole cast performs as a powerful unit, though a standout is Musa Motha as Barney. With just one leg, watching Motha move as nimbly as any member of the cast is a marvel, his physicality routinely jaw-dropping in its strength and poise.

Rambert’s Peaky Blinders: The Redemption of Thomas Shelby is at Troubadour Wembley Park Theatre until Nov 6, followed by a UK tour in 2023; peakyblindersdance.com