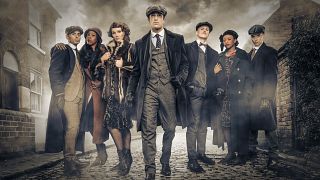 The world of Thomas Shelby and Peaky Blinders has been reimagined for the stage as a dance show uncovers the trauma that created the characters from the renowned TV series.

Written by original series creator Steven Knight, the official show ‘Peaky Blinders: The Redemption of Thomas Shelby’ hit the stage in London as part of a UK tour that is bookended by runs in the Peaky Blinders home of Birmingham.

Knight’s series has been a runaway success since it debuted on the BBC in 2013. Following the infamous Peaky Blinders gang in 1920s Birmingham, an all-star cast led by Cillian Murphy stole the attention of audiences worldwide as his motley crew’s empire expanded across six successful seasons.

Adapting a show that ran for six seasons, covering over a decade of time and multiple continents is no easy task. Making that adaptation a dance show is even more daunting.

It’s lucky then, that Knight entrusted the job to Rambert, one of Britain’s oldest and boldest dance companies.

This is the first time Rambert has taken on a project of this scale for a TV adaptation, but after working with Knight on a festival and one of the show’s episodes, it was a natural fit.

"It was very important for me that Steven was on board. That’s because all these characters, this universe of Peaky Blinders is from his imagination,” says Benoit Swan Pouffer, artistic director of Rambert and choreographer and director of the show.

A prequel to the carnage

'Peaky Blinders: The Redemption of Thomas Shelby' goes back to where it all began. Opening up in the trenches of World War I, the dramatic show gets into the nitty gritty of the violent beginnings that created the iconic Shelby family.

“The script that Steven wrote gave me the opportunity to dive into the work, into those characters, this world and through a prequel, gave me an understanding of why they are and who they are,” Pouffer explains.

The TV show starts in 1919 in the immediate aftermath of the war.

“When I read the script, I felt very privileged because no one had read that and it's not an interpretation. It's actually the man who created these characters that wrote the original show,” Pouffer fans.

Knight had created a storyboarded script of around 60 to 70 pages, and from that, Pouffer could create a dance theatre show. Pouffer believes that dance is the perfect medium to tell that story. Despite the complexities of the series' storyline, the core struggles of the show - love and loss - are perfectly suited to dance.

“Those themes are universal,” Pouffer says. “Dance, you don't have to speak my language to understand how I feel. If I move my body, or speak very loudly, body language can say something, but your behaviour says something else. And that's very revealing.”

The contradiction between intention and action is at the heart of Tommy Shelby’s character. It’s both what makes audiences fascinated by him and also why he’s a ripe choice for a character in a dance theatre show.

Tommy is played by Guillaume Quéau and Prince Lyons for the run, both actors bringing something unique and unlike Cillian Murphy’s iconic portrayal.

When asked, Pouffer didn’t consider trying to fill Murphy’s boots, or his flat cap. “That would be a true failure,” he says. “He’s an incredible artist.”

“But we interpret a role, and that role is Tommy Shelby," not Cillian Murphy, Pouffer explains. Instead, Quéau and Lyons have both created two drastically different takes on the character and who he is. Pouffer also cast two Graces, with Naya Lovell and Seren Williams reinterpreting the role made famous by Annabelle Wallis.

“The goal was not to reincarnate Murphy or Wallis - it was to really get the DNA of the character, and understand them,” Pouffer says.

Bringing the world of Peaky Blinders to the stage wasn’t just the work of Pouffer’s excellent directing and choreography skills. Knight and Rambert brought together the voice skills of series regular Benjamin Zephaniah, to contribute a voiceover as part of the show’s soundtrack.

Handling the rest of the soundtrack was down to Roman GianArthur. The singer, composer, arranger, producer, and performer has worked on the films Antebellum and _Lady and the Tramp,_and has featured on albums by Janelle Monáe and Jidenna.

Much like with filling the boots of Cillian Murphy, matching the soundtrack of the show is also a tremendous task.

From the Nick Cave theme song to the Radiohead and Jack White featuring soundtrack, Peaky Blinders has always prided itself on its snarling anachronistic backing tracks.

GianArthur was more than game.

Radiohead featured heavily in the show’s soundtrack, and GianArthur had already created 2013’s ‘OK Lady’, a reimagining of their songs through the sounds of D’Angelo.

“It was kind of going back into that mode that I had explored quite well,” GianArthur explains. One song, ‘Not My Gun’ was particularly inspired by that connection. It comes around halfway through at a dramatic high point.

Unlike on film projects, GianArthur had to make the music before rehearsals began. To do it, he took the script and recorded himself reading it out loud.

“I could listen to it as I walked around my neighbourhood,” he says. “I would hear the action, with no music, and then imagine the music as it might be put in.”

Getting the tone of the show right was essential. Knight and Murphy used to have heated debates when choosing the soundtrack for the series, questioning if a song was ‘Peaky’ or not.

What GianArthur has created, alongside Pouffer and the rest of the creative cast, is a unique show that isn’t just an ode to the celebrated TV series. It’s its own chapter, reimagining the roots of the original drama in a new form.

In GianArthur’s words, they’ve created something between a ballet and a rock concert. “It’s badass, if I do say so myself” he laughs.

For Pouffer, it’s an opportunity to bring a whole new audience to dance, as a show that is both for fans and newbies to the series.

“Everybody dances. Even if you say you don’t dance, you do,” he says. “Dance is something we all do and we can all relate to. It’s a medium that really reaches your soul.”

And whose soul is more tantalising to dig deeper into than the elusive Tommy Shelby?

Rambert’s Peaky Blinders: The Redemption of Thomas Shelby is at Troubadour Wembley Park Theatre until Nov 6, followed by a UK tour in 2023;peakyblindersdance.com