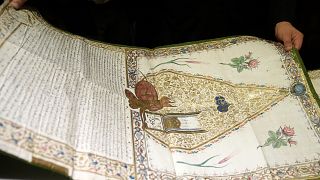 A Pantokrator monk holds a manuscript at the library of Pantokrator Monastery in the Mount Athos, northern Greece.   -  Copyright  AP Photo/Thanassis Stavrakis
By Euronews  •  Updated: 22/10/2022

In a medieval monastery on the Mount Athos peninsula in northeastern Greece, researchers are gaining a glimpse of what life was like in the region more than six hundred years ago.

Records by the Ottoman Empire from that period have sat virtually unknown inside the Pantokrator Monastery's metal library.

But now researchers are looking for the first time into roughly 25,000 documents thought to be the oldest Ottoman records ever discovered.

Some of the documents in the collection date back to 1374 or 1371. Before this find, researchers believed the oldest Ottoman documents were stored in Istanbul’s archives, which only date back to 1480 or 1490.

“Here we have the most ancient Ottoman documents - before the fall of Constantinople - which [have been] kept in Mount Athos's monasteries," said Father Theophilos, a monk at the Pantokrator Monastery.

The Ottoman Empire ruled northern Greece from the late 14th century, decades before it took control of the Byzantine capital, Constantinople (modern-day Istanbul), in 1453.

At its peak, the Empire spanned the North African coast, much of the Middle East and the Balkans. While losing territory, it lasted until the early 20th century, collapsing after World War I.

The religious community on Mount Athos is home to documents that date back a thousand years, many of which were already extensively studied.

But until now, the Ottoman texts have remained untouched.

According to the Byzantine scholar Yiannis Niehoff-Panagiotidis, it would be impossible to understand life on Mount Athos under Ottoman rule without these documents.

Many of them are legal texts, such as decrees and deeds of ownership, that regulated how the monks living in the area dealt with authorities.

According to the manuscripts, the Ottoman Empire preserved the area’s autonomy during its early rule.

"The Ottoman state's court decisions show that the monks' small democracy was able to gain the respect of all-conquering powers," said Anastasios Nikopoulos, a jurist and scientific collaborator of the Free University of Berlin who is also researching the documents.

"And that is because Mount Athos was seen as a cradle of peace, culture ... where peoples and civilizations coexisted peacefully."

He added that one of the first decisions of Ottoman rule was to draw up documents to protect the community.

"It's strange that the sultans kept Mount Athos, the last remnant of Byzantium, semi-independent and didn't touch it," Niehoff-Panagiotidis said.

"They didn't even keep troops here. At the very most they would have a local representative who probably stayed at (the community's administrative centre) Karyes and sipped tea."

Greece commemorates 200th anniversary of its war of Independence

The Ottoman Empire enters the war