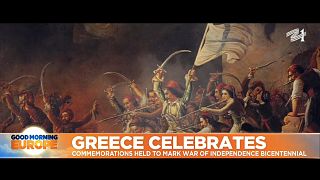 Greece commemorates 200th anniversary of its war of Independence

Two hundred years ago the Greeks declared a War of Independence against the Ottoman Empire in a war that lasted for nine years.

Today, a special committee called “Greece 2021” has organised celebration events that have already begun and they will continue until the end of the year. With its long tradition of resistance to the Ottomans, the Peloponnese region was at the heart of the revolution.

Gianna Aggelopoulou Daskalaki, president of the ‘’Greece 2021’’ committee says the Greek nation went through all those difficulties with triumphs, but also with catastrophes: “One of our goals is to remember everything that has happened during the last 200 years, in various ways, and to also think about what we (Greeks) are going to do from now on.”

Daskalaki added that the goal of the committee is to leave something behind for the younger generations, such as funding projects that will remain after the celebratory year: “The first institute of artificial intelligence and algorithms is going to be created. Young charismatic Greeks are going to be able to study those in Greece and benefit from that professionally.”

Athens is celebrating with a military parade. However, due to restrictive measures, there is no crowd, there are no viewers, so this year it is mostly a TV spectacle.

Some foreign leaders are in Greece for the celebrations. Nicos Anastasiades, President of the Republic of Cyprus, Prince Charles and the Duchess of Cornwall, the Russian Prime Minister and the French Defence Minister.