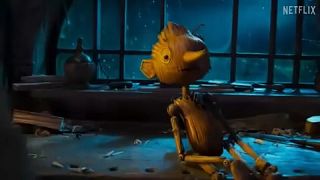 A world premiere is always a special occasion for any director as it's the culmination of a labour of love.

Guillermo del Toro's presentation of Pinocchio at the London Film Festival was a celebration but also a commemoration as the director's mother died just a day before.

Del Toro has reportedly been working on this film for the past 15 years, a period he describes as half of his career.

Pinocchio has made more than 20 on-screen appearances since 1911, including a recent Disney live-action adaptation. But del Toro's new stop-motion version stands out by being set against the backdrop of fascism in Italy during World War II.

And unlike its predecessors, it is not intended for young children.

"The thing that I remember most clearly is how scary the world seems to Pinocchio," del Toro said on the red carpet.

"Pinocchio is normally a story about obedience. I wanted to make one about disobedience."

The film will be available on Netflix from 9 December. Movie lovers can also watch it on the big screen at this week's Lumière Film Festival in Lyon, France.