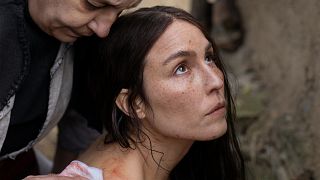 This is the latter, the sort of calling card that makes you hungry for more. More than that, Macedonian-Australian writer/director Goran Stolevski’s thoughtful and chillingly lyrical folk-horror fairytale is without a doubt one of the finest films you’ll see all year.

You Won't Be Alone unfolds in remote mountain village in 19th century Macedonia, and sees an ancient spirit known as the Wolf-Eatress (or Old Maid Maria) make a blood pact with a mother: the parent gets to keep the infant, Nevena, until she’s 16, and then she must hand the teen over as reparation for the horrible things Maria endured in the same village. As the bargaining presence stakes claim on the child’s soul, she renders Nevena mute in the process. The fearful mother decides to sequester her daughter and forces her to live in almost total isolation, in a bid to outsmart the witch.

Which rarely works when it comes to blood oaths with supernatural entities.

Nevena is inevitably taken by the Wolf-Eatress, who adopts her as an apprentice. This entails that the young woman can now, like her new enchantress mother figure, take on the physical form of anyone she chooses, human or not. Once the people or animals have been murdered, of course.

As Nevena begins to experience life for the first time, she distances herself from the tutelage of the wolf-eatress and ventures out into the world. She takes a new shape and discovers the human condition, both cruel and warm when it comes to the unspoken threads that bind people.

This shapeshifting set-up compelling allows Stolevski to play with gender identity and his cast, as Nevena switches skins to embody Noomi Rapace (The Girl With The Dragon Tattoo, Lamb), Alice Englert (The Power of the Dog) and Carloto Cotta (The 1001 Nights). Each performer shines bright, excelling when it comes to silently conveying the feelings of a person experiencing life for the very first time. But it’s Sara Klimoska (the original Nevena) who captivates the most, managing to sell her character's saucer-eyed curiosity as well as a simmering ache for a life she yearns to reclaim. Her mute condition means that a constant inner monologue guides the viewer through the transformations as well as her meditations on social relationships and dynamics between men and women.

As for Old Maid Maria, Romanian actress Anamaria Marinca (4 Months, 3 Weeks and 2 Days) delivers a subtle and impressive performance as the story’s central foe. Her character is without a doubt the most fascinating one on several levels. The mythology surrounding the Wolf-Eatress is never spelt out but cherry-picks from lore related to vampirism and witchcraft, with a perfectly judged method of metamorphosis that walks a tightrope which threatens at times to descend into all-out bodyhorror. However, this element is brilliantly reined in by the director, who ensures that the mutations never condemn her as an all-out cackling villain.

Instead, and much in the same way Stolevski perfectly balances the need for visual horror so that it never overpowers the more existential nature of his fairytale, we discover that Old Maid Maria is martyr, a mortal whose life has been destroyed by mankind’s worst instincts. This casts her as not one but all three iterations of the classic mother-maiden-crone identities traditionally found in faiytales; it also makes her mythical rebirth an existence weighed down by grief, which inspires both empathy and fear.

Stolevski’s balancing of these too emotions, as well as his command of horror grammar, is particularly impressive. He understands that no jump scare could ever hope to compete with skin-crawling peripheral menace. The animals throughout the film are key in this respect. Their presence feels only natural considering the bucolic setting but they adopt an other dimension: the Wolf-Eatress is potentially everywhere and everyone, much like the demon of the West Wind Pazuzu in The Exorcist when it echoes through the possessed Regan a line of previously heard dialogue. “Father, could you help an old altar boy?” asks a homeless man on a subway platform towards the start of William Friedkin’s 1973 classic. The chilling implication of hearing this same line later on in the film suggests that evil is omnipresent, always watching, even before the pea soup vomiting starts and heads begin their 360° turns. The same applies to the animals in You Won’t Be Alone: at no point does the audience know what form the witch enhabits. She could be in the woods, gazing from afar, or possibly a more active observer, always hiding in shot for all anyone knows. It's an ingeniously handled, frisson-inducing detail that makes the title feel like a literal, unerving and somehow strangely tender warning.

And therein lies one of the film’s biggest strengths. Stolevski allows for multifacetted emotions to co-exist and never holds your hand through the runtime. He prefers to let the idiomatic storytelling, the hushed stream-of-consciousness and the transcendent mood breathe and compliment Mark Bradshaw’s mesmeric score, which marries a minimalistic piano melody with woozy ambient. By not spelling everything out, Stolevski shows trust in his audience and elevates the thematic content regarding patriarchy, metamorphosis and the interconnectivity of lives.

His existential folk horror will unavoidably evoke Terrence Malick – especially through the cryptic and at times deeply moving voiceover that ponders the greater questions of life – as well as The Witch. The first touchstone makes perfect sense, but once again, Stolevski's neat balancing act means that You Won’t Be Alone never feels like a pale imitation. The second comparison is apt to a point: Robert Eggers' film also deals with witchcraft and folklore, but You Won’t Be Alone reaches for another oneiric sphere that The Witch does not aspire to.

The end result is unique on its own terms – a bold meditation on identity that offers a compassionate reminder: even if the world is a “burning, hurting, retching thing”, in which violent trauma will be cyclically inherited and forced upon future generations, the hope we hold onto for betterment is worth preserving. Always.

You Won’t Be Alone premiered at this year’s Sundance Film Festival and screens at BFI London Film Festival (on 14, 15, 16 October) and at Sitges Film Festival (Spain) in its Oficial Fantàstic Competition (on 13 and 15 October).

Euronews Culture's Film of the Week: 'Le Cerveau' ('The Brain')