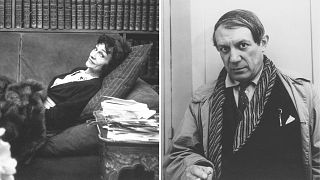 The show at Madrid's Thyssen-Bornemisza museum highlights works from the two 20th century creative giants side by side, and demonstrates how Picasso's art became infused with the designer's ideas for texture and form.

"Chanel and Picasso engaged with their century. Their lives, entirely devoted to creation, remain contemporary," says Hélène Fulgence, the director of Patrimoine Chanel.

"Interpreters of their era, they grasped the spirit of their time and implemented aesthetic revolutions that echoed the profound transformations of society," she added.

How did the two icons meet?

Chanel and Picasso first met in the spring of 1917 and they became close and long-lasting friends.

Chanel socialised with the Spanish artist and his wife at the time - dancer Olga Khokhlova - when Picasso was actively involved with Serge Diaghilev's ballet, collaborating on sets and costumes.

According to Fulgence, Chanel's introduction to Picasso was really her "gateway into the artistic world in the spring of 1917."

The Spanish artist and fashion designer worked together on two occasions, both with surrealist artist Jean Cocteau.

Firstly, they worked on "Antigone", a modern-day adaptation by Cocteau of Sophocles' play, which was first performed in Paris in 1922.

The play's sets and masks were created by Picasso and its costumes by Chanel.

They then worked on Serge Diaghilev's Ballet russes "Le Train Bleu" in 1924 together.

Picasso is often criticised for his treatment of his many lovers, two of whom committed suicide, but this exhibition aims to show another side of the artist.

"Precisely because Olga and Gabrielle Chanel play a central role and he (Picasso) is placed in a very different context. I believe this will enrich our vision of Picasso and it will distance him from certain stereotypes and certain topics," he explains.

'Picasso and Chanel' is divided into four main sections spanning from 1915 to 1925.

The first section titled Chanel style and Cubism presents a series of paintings and garments that show the influence that Picasso and the Cubism art movement had on Chanel's fashion design.

Similarities are apparent when looking at the geometrical language of straight, angular lines seen in both Cubist paintings and Coco Chanel's first designs.

Chanel's use of monochrome shades is another commonality with Picasso's work.

In the exhibition’s second section, visitors can learn about Picasso's relationship with his first wife, Olga Khokhlova, through a series of portraits he did of her.

The last two sections look at the projects Chanel and Picasso collaborated on together, such as on Antigone and Le Train Bleu.

'Picasso and Chanel' at the Museo Nacional Thyssen-Bornemisza until 15 January 2023.

How has Picasso's legacy been affected by the #MeToo movement?