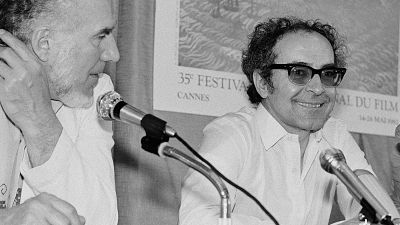 “It is said that Jean-Luc Godard reinvented cinema, but he didn’t just transform it into something else once, he kept doing it with every film, with every shot and every cut, or as he would have said, 24 times per second,” says Chiara Marañón, director of content at MUBI.

The incredible work Godard did to redefine cinema can sometimes elude the more casual cinephile. Last week, Euronews Culture looked at what it was that defined Godard’s style and the trappings of the French New Wave.

In this second instalment, we’ll examine just how much Godard was willing to break rules and become his own unique kind of director.

As Marañón explains: “There were no real boundaries for him, as a great saboteur he single handedly broke every rule to then come up with new ones only to set them on fire again, that is why he has been immensely influential but at the same time can have no real imitators, his uniqueness is so radical. That can never be successfully copied.”

A vision for film

One of the clearest ways Godard influenced film was in establishing a cinematic language that was able to comment openly on itself, Dr Neil Archer, Senior Lecturer in Film at Keele University explains.

“Godard was constantly thinking about what you can do with different shots and with different sequences of shots,” Archer says. His unconventional approach to linear editing and meta-narrative can be found in unexpected places today like Edgar Wright, the director of ‘_Shaun of the Dead_’ and ‘_Hot Fuzz_’.

“Edgar Wright understands that part of the fun of Godard is in the way he locates genres in a different context. Part of the fun of watching a film like Shaun of the Dead, is because it's aware of its location and the context of its genre,” Archer says.

There’s a word that has seeped into mainstream usage around film, one pioneered by Godard and the French New Wave: ‘Auteur’. The idea of a singular artistic vision that, despite the many hands it takes to make a film, puts the artistry solely in the lap of the director.

Auteur theory has been thoroughly adopted by many big names in the wider film industry, with directors like Martin Scorcese and Quentin Tarantino often labelled as contemporary examples in big budget cinema. The editing in Scorcese’s ‘_Mean Streets_’ has clear Godardian traits, while Tarantino named his production company ‘A Band Apart’ after the Godard film ‘Bande à part’.

The personal, the political, and the experimental

Where the difference between many modern auteur and Godard lies though is often in their political and analytical approach to filmmaking, Archer argues.

“Godard was always very political. Everything he did in his films was political and how to reconcile genre films with what’s going on in the world,” Archer explains. From Godard’s early films referencing the Algerian and Vietnam wars to his later Marxism, he was never afraid to make his political thoughts known through his work.

For the film critic David Sterritt, Godard’s willingness to be honest to his political and personal interests, as well as his experimentations in form, separate him almost entirely from the multiplex cinema landscape.

“Godard has always primarily been an influence on what we might call the art film,” Strerritt says.

Mainstream cinema, on the other hand, is still “people telling stories that have to do with love or romance or action or violence; told in a nice, continuous way so that audiences can sit and just let the movie wash over them without having to put in any act of thought.”

This, Sterritt argues, was everything Godard strived against.

“His movies were always intensely personal. That's one of the reasons why he had virtually no actual box office successes in his entire career over decades and decades, because his movies were also challenging,” Sterritt says.

By personal, Godard wasn’t just autobiographical, they also dealt with his personal idea of what cinema could accomplish at that time. This led to many experiments that would alienate a mass audience.

“So many of his movies have titles which indicate that they're not meant to be finished works,” Merritt laughs. “They're experiments. They're works in progress. One of his movies, the subtitle is ‘A Movie In the Process of Being Made’. That's the subtitle of the actual movie that you go to the movie theatre to see!”

When Godard was making an adaption of King Lear in 1987, his lead actor, the writer Norman Mailer walked off the production within a few hours after an argument. Godard finished the film anyway, just changing the narrative so the main character didn't need to be there.

While Godard is an established name, financial success was never really the goal, instead it was the process of making film and furthering the medium that drove him.

Sterritt interviewed Godard in 1994 and asked how he could continue to make these risky, unconventional films that reach such small audiences.

“He said, ‘Oh, I have a name. And producers know who I am. And usually to somehow be associated with me, they’ll give me a little bit of money’.” Sterritt recalls.